It’s never a bad idea to work on getting better at orienteering and night navigation, and that is exactly what Bob Jenkins and I did last night.  We headed up to Rock Bridge State Park in Columbia, MO for some fun and practice with map and compass.  It was a beautiful Fall evening, and we ventured into the woods at around 5:40 PM.  With only an hour or so of daylight left, we decided to do an intermediate course since some of the checkpoints would have to be found in the dark. 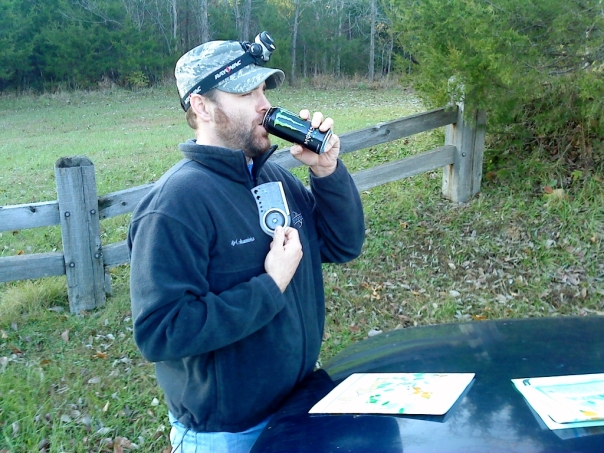 Starting at checkpoint 19, we decided to bushwhack up the steep hill (aka – cliff) to CP 18. After scrambling up and nearly falling into the creek at the bottom several times, we realized it may have been easier to take the trail to this CP, but where is the fun in that?

We found CP 18, and then we headed down the trail to easily find CP 17 at the trail junction.  From here, Bob (who, by the way, has only used a map & compass once before this) shot a bearing and easily guided us right to CP 26. 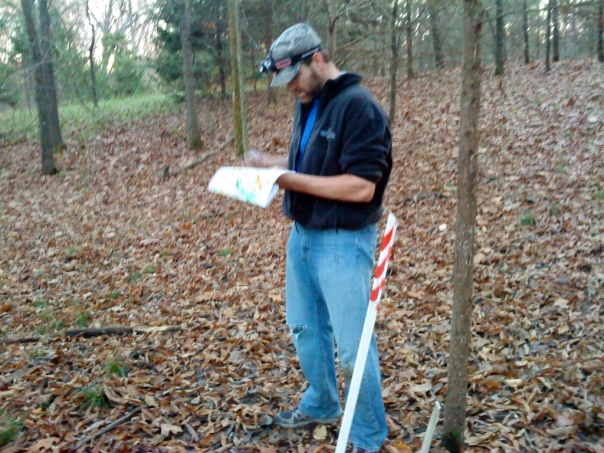 Although the clue for 26 was “Forest Edge,” it looked as if we were in the middle of the forest rather than at the edge of it.  From CP 26, we headed South toward CP 32.  After going by several depressions we came to the two fences and the road that we needed to cross. 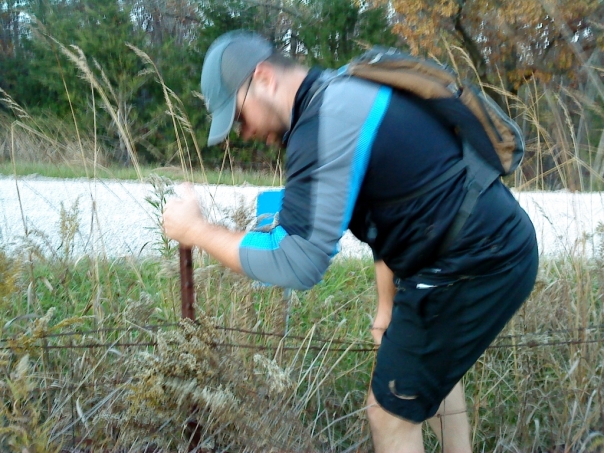 Luke clearing the fence so quickly the camera could only get this blury shot.

We had to bushwhack across a large, brushy field to get to CP 32, and with the darkness coming on quickly, we needed to pick up the pace a little bit. 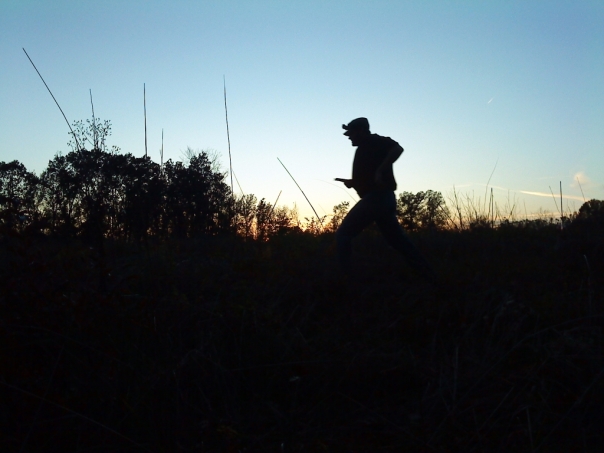 The epitome of grace - Bob's silhouette against the setting sun as he races across the brushy field.

As the sun began to quickly disappear, Bob was ready to bushwhack back across the field whence we came so we could simply hop back onto the road to get to CP 31.  I, however, being the the more experienced navigator, said that we should head South to the trail which would then lead us right to CP 31.  I argued that this would let us avoid all of the previous bushwhacking, so Bob agreed.  After finding the trail, it appeared that it headed onto private property.  So, we ended up bushwhacking a lot farther through much harsher terrain than if we had simply backtracked like Bob suggested (Yes, Bob.  You were right.  I was wrong.)  By the end of this bushwhack we were covered in beggar lice, hitch-hikers, or whatever you want to call them. 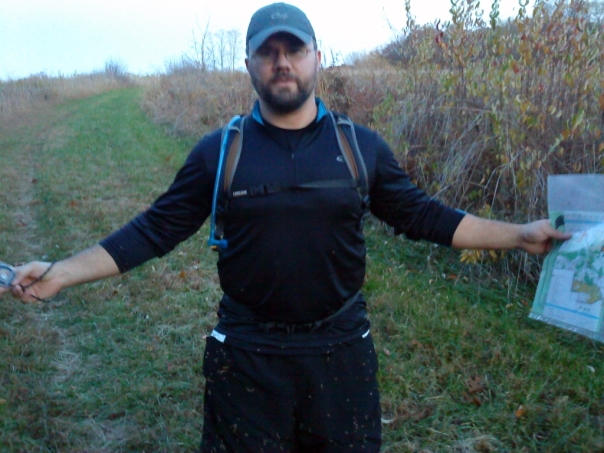 Beggar lice was everywhere, although this picture does not show the true extent of how covered we were.

Needing to use our lights now, we quickly found CP 31 slightly off the trail/road junction.  From here we decided to go for CP 33 even though that was not in our original plan.  We shot a bearing and headed off towards 33.  We got to the reentrant where the CP should have been, but we were having a hard time finding it in the dark.  We popped out onto the road to regroup.  We decided that we were in the right spot and must have just missed the CP in the dark. Sure enough, we headed back into the reentrant and soon found it.

From here we had a little bit of trouble finding CP 30.  It was supposed to be on a “Knoll”, but in the dark it was tough to tell what a knoll was supposed to look like.  After some backtracking and seeing some glowing eyes staring at us, we eventually found the CP.  It did not look like a knoll at all. I would have described it as being on the side of a hill.

We hopped back on the trail and decided to add CP 21 to our route since it was on the way back to the car.  As we were hiking on the trail, Bob pointed out a faint trail that he thought led to the CP.  I thought it was a game trail, so we kept going another 20 yards or so.  We saw the open field with a pavilion, and we knew we had gone slightly too far.  We headed back down the trail and then into the woods.  We both found the CP at roughly the same time, and then we realized that the “game” trail that Bob had pointed out did indeed lead right to the CP (Yes, Bob.  You were right again. Jerk!)

From here we made it back to the car  at around 8:00 for the drive back to Jefferson City.  It was a lot of fun, a good refresher course for Bob, and great practice (especially the night navigation) for both of us.