Goin’ Camping – To Adventure Race Camp That Is

If you haven’t heard about this adventure racing camp, then you need to go check it out right now.  The 3-day camp will cover topics such as orienteering, canoe and kayak paddling, and fixed ropes (rappelling, zip lines, ascending, traversing). There will also be the longest and highest tyrolean traverse in the Midwest at this camp – over 500 feet long – holy donkey turds!

The paddling portion is taught by Jeremy Rodgers, an elite adventure racer, professional paddler, and a member of the US Canoe and Kayak Team.  So I guess he has enough credentials to possibly show me a thing or two.  On the other hand, maybe I’ll be able to give him some advice – “Don’t push the water, pull the canoe.” Well, maybe not.

I’m a little nervous about the ropes stuff since I’m not a huge fan of heights. However, if I ever want to do longer races, I’m going to have to learn this stuff sooner or later.  It also looks so flippin’ fun… I can’t wait.  Check out a couple of pics from last year’s camp:

What did we get ourselves into? 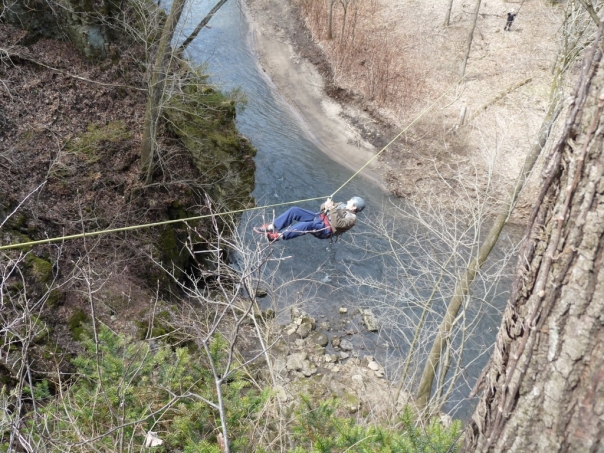 To see all of the photos from last year’s camp go here and also go here.

The camp concludes with a 6 hour adventure race including orienteering, mt. biking, paddling, fixed ropes, and caving. The race, called Lightning Strikes, also happens to be a qualifying race for Nationals.  You have to place in the top 3 or 4 as a 3-person coed team, though, which means we won’t be qualifying for Nationals.  The Lightning Strikes race is also part of the Checkpoint Tracker Series, which is pretty cool.

All instruction, the 6 hour race, lodging, and some of the meals are all included for a measly 175 bucks.  Since most adventure races cost $100 or more anyway, we thought this was a pretty good deal.  The camp takes place the last weekend of March in Mount Carroll, Illinois.  I can’t wait to go, and we’ll take lots of pictures to post.  So… Who else wants to go?