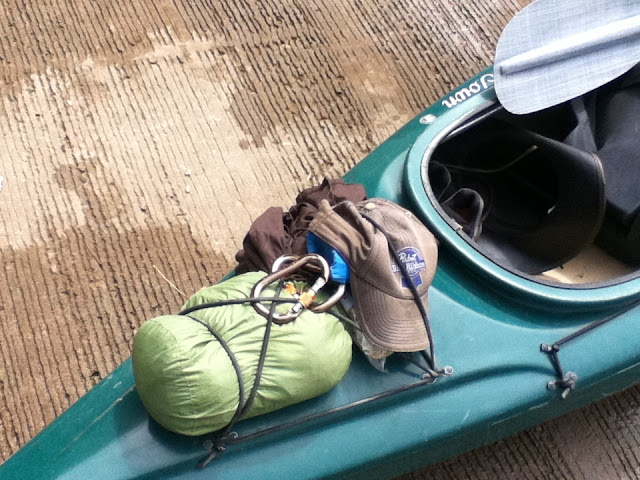 Last Friday, I finally scratched one more “To-do” off of my bucket list. For years, I’ve wanted to paddle the Missouri River to Hermann. I had originally wanted to camp overnight on a gravel bar somewhere, but with all the rain this year that hasn’t been an option.

The first thing I noticed when I got to the boat ramp was a giant barge moving upstream. It was kicking up huge waves and making me nervous.

It's absolutely disgusting how small these waves look in the photo. Total bullshit

I let the water calm down for a good ten minutes before shoving off into the “Old Muddy”.

I couldn’t believe I was finally doing it, I’d been afraid of this river most of my adult life, but now I was out here by myself. No cell phone, no team-mates to drag me to shore if things went sour, and no way in hell my mom was gonna find out about it until the paddle was over.

The water was still a bit choppy from the barge, but after about 5 minutes soon I was far enough away that the waves were no longer a problem. The weather forecast was pretty grim, but for the moment it was sunny and pleasant.

View of the Capital while I was floating downstream

I didnt take long to figure out that sand barges are the ruling force on this section of the river. Luck was on my side though, as all but one were resting peacefully along the bank. 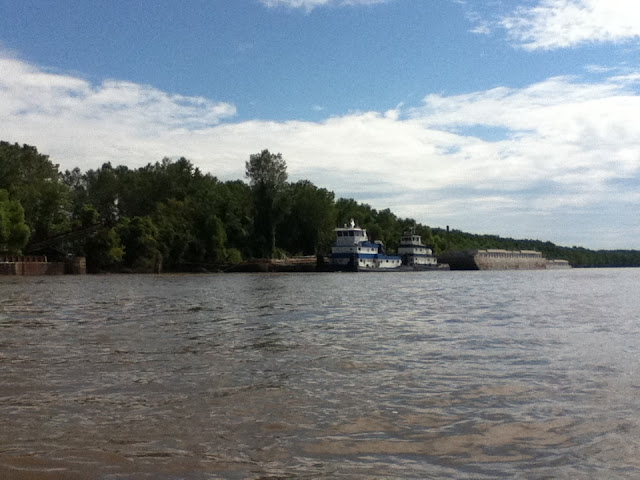 I noticed right away that the MO river and the Katy Trail have a couple of things in common. Firstly, they’re both marked at each mile so you always know where you are. Secondly, everyone you encounter wants to know where you started from and where you’re going. People standing on ridgetops would call down to me, “Where did you start from?” It was crazy.

There must be a lot of money in sand. These guys are all over the place.

I dont know how far I had traveled when I saw a large red sign in the shape of a triangle. I figured it was a warning symbol of some kind, but didn’t see anything in the water. This wasn’t a mystery for very long..

For reasons still unknown to me, the water just beyond the sign erupted. There was a plume of water, lots of bubbles and a big-ass whirlpool. The sound alone was terrifying, it was like something straight out of a horror movie and it absolutely scared the shit out of me. It lasted about 3 seconds and then.. nothing. it was as though nothing had happened at all. Another few seconds went by and it all happened again.

It was spooky, man..real spooky. Red triangles are not to be toiled with.

I’d say the hardest part of long distance paddling is being on your butt for extended perionds of time. I had a decent amount of pain in my hamstrings after a few hours, and tried to compensate by sitting cross-legged in the boat. This made the boat a bit unstable, but helped with the pain a LOT.

The closer I got to Hermann, the shittier the weather became. It was pretty obvious that I was gonna get rained on, but I decided to keep the ipod handy until things got ugly. Using the stopwatch on my ipod, I figured out that I was averaging (about) 9 minutes per mile. I dont know if that’s any good, but it seemed easy enough to hold that average and still be able to take in the sights and shoot some photos. I had forgotten my mileage map in the truck, but was fairly certain that Hermann was at the 100.8 mile mark. (This would later prove to be incorrect)

The peacefulness of my surroundings made it easy to forget about work, bills and all of that everyday crap. I saw countless ducks, blue-heron cranes and even a young fawn grazing next to the water. I’ll admit that it got a bit monotonous at times, but it was definitely better than being at work.

Every now and then I’d catch a glimpse of the Katy Trail, which I found oddly comforting. One such time was as I was passing Portland.  The current kept turning the boat in odd directions, so this was the only (crappy) photo I could muster.

Obviously worried about dropping my ipod in the river

I had to laugh out loud when I saw this thing right next to the water. This is the little shelter where Adam and I hid from the rain during our first Treloar trip. You know…the trip where he couldn’t hold his liquor and barfed up an $8 cheeseburger and fell through a giant hole in Luke’s hammock. It wasn’t even a double cheeseburger…what a pansy.

I've only got one thing to say to you, Adam..

I’d be lying if I told you I was keeping track of time out there. While the weather was nice, the miles flowed by and the world felt right. Before long I couldnt help but think my surroundings looked very familiar, as though I had been out here before. That’s when I realized I was at the confluence of the Osage River and the Missouri. I’ve fished in that spot dozens of times, but always from the safety of a much larger boat. I had never realized how turbulent the water gets when two rivers come together. I got a photo before I entering the riffled water ahead.

I'm pretty sure I caught my first spoonbill in this very spot.

Just as the  rain was starting to fall, I made a mental note that there were still 10 miles to go til I got to the 100 mile mark. One last photo was taken, then the ipod went into a drybag.

I really need a waterproof camera..and a rainjacket

Those last 10 miles took an eternity. One thing I learned out there is that you can see for a long distance. At times I could see the next mile-marker even as I was passing the one right in front of me. This was a blessing and a curse, especially when the wind picked up and rain started soaking through my clothes. I paddled toward the same riverbend for at least 40 minutes, wondering if it wasn’t some kind of cruel mirage.

I passed the 101 mile mark, thinking that Hermann was at 100.8. Excitement poured through me, but was replaced with frustration when I passed the 100 mile marker 10 minutes later.

I was tired, hungry and ready to be done. I would periodically dip my hands in the warm river to fight the cold, then rub my legs to wake them up. The rain was letting up now, but had left behind a thick blanket of fog. I was still staring at that same damn riverbend, only now it was blanketed in fog. It was actually quite beautiful, but I wasnt in the mood for sightseeing anymore. The loud blast of a passing Amtrak startled me a bit, and when I looked back to the river I could see a bridge through the fog. It was the Hermann bridge.

I actually yelled out loud in joy, knowing I was nearly there. Of course, seeing the bridge still meant another 30 minutes of paddling. I didn’t care, all i had to do was paddle another mile or 2 and it was BEER THIRTY.  I paddled past the 99 mile marker, then the 98, then finally passed under the bridge and towards the boat ramp. Mission accomplished.

My brother was waiting for me at the end of the boat ramp. It was after 6, and I had told him I’d probably finish around 5. The first words out of his mouth: “You need to get a f**king cell phone.

And so we went to the local watering hole for victory beer and hotwings. It was a great day, I spent 45 miles on the Missouri River, then drank beer and ate hotwings with my little brother. Does it get any better than that?

Posted on September 16, 2011, in Adam gets fired from the team, Missouri River Trip, MO RIver, Training. Bookmark the permalink. 16 Comments.