Four men (and Adam), perfect weather, and 55 miles of gravel goodness.  That basically sums up the Boone-Doggle ride back in February.  Casey was in town, and Robby Brown, Adam Laffoon, and Aaron Lackman joined us for some fun.  We met at the commuter lot near the Katy Trail, and Adam was promptly fired for not wearing his team jersey.

Knowing that I was trying to lose some weight to avoid eating dog food, Robby was kind enough to bring breakfast: 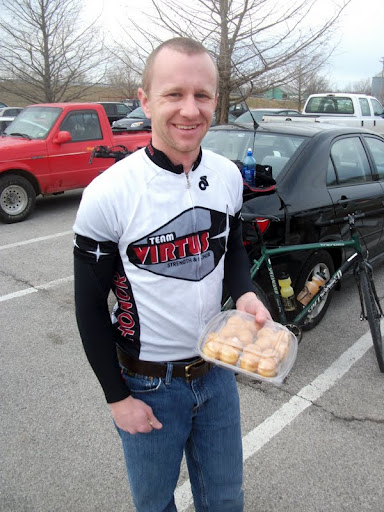 Breakfast of Champions... Sumo Champions, that is.

Robby, and Adam had taken a day off from work to ride with us.   Unfortunately, Bob Jenkins was unable to find anyone to fill in for him, so he had to miss perhaps the best group ride in history.  Aaron, had to work later in the day, so he was going to ride the first half of the ride with us.  Oh, and he was kickin’ it old school on this: 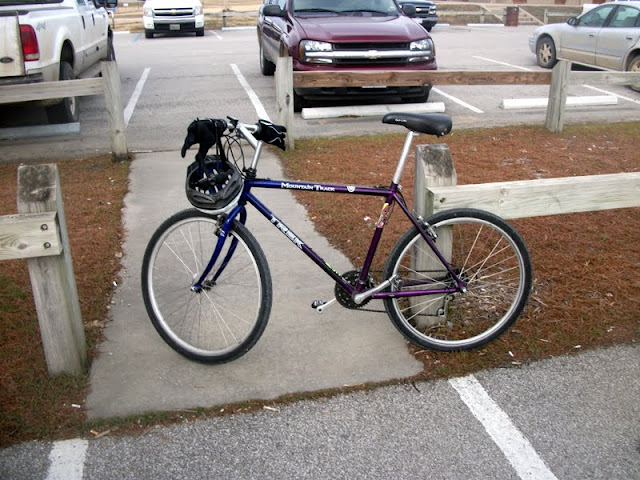 Although it was a bit chilli at the start of our ride, the weather was beautiful… Especially for mid-February.  We rolled out on the Katy Trail under overcast skies.  Casey was pretty excited to ride the Katy Trail which seemed odd to us.  I guess we just take it for granted since it’s in our back yard and we ride it all the time. 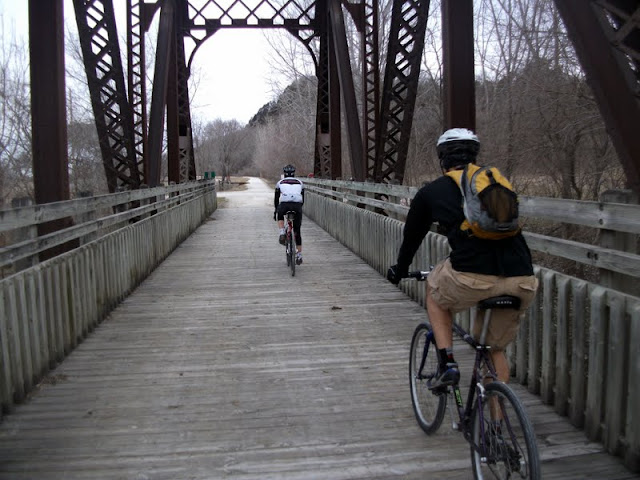 Bridge on the Katy Trail

We soon hopped on some gravel, and I’ll be honest.  I just wasn’t really feeling it.  My legs felt dead, and I felt weak.  Hoping I just needed to spin my legs out a little to warm up, I kept riding.

It wasn’t long before we passed the exact spot where we found Falcor two years ago.  And then we rode a monster hill.  Well, I should say that everyone but me rode the hill.  I got about halfway up when I had to get off the bike and walk.  I just had nothing in my legs.

When I finally caught up to the other guys, I told them I might just turn around.  I didn’t want to slow them down.  They talked me into at least continuing until we reached the gas station in New Bloomfield at roughly mile 24 where I could ride back with Aaron if I needed to.  I agreed, and after downing a Honey Stinger Waffle, a Foosh Caffeinated Mint, and half a bottle of my go-go juice, I started to feel a little better.  After another 15 minutes or so, my legs started coming back.  I’m not sure if I was run-down from being in a caloric deficit or if it was just one of those mornings.  I was just thankful that I was back to full-strength. 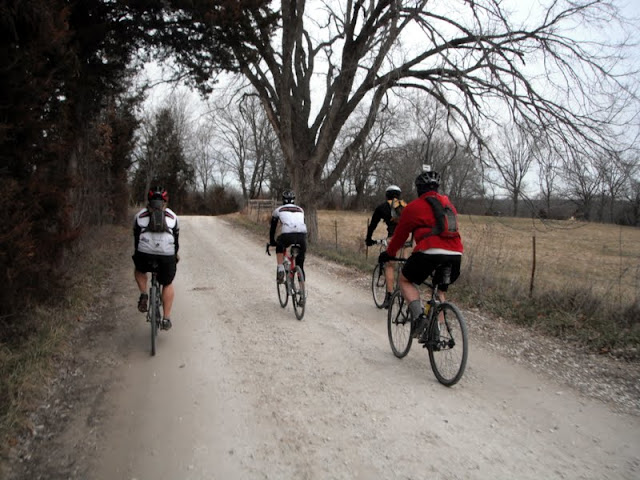 After more gravel followed by a bit of pavement, we soon found ourselves in the booming city of New Bloomfield.  This was just under the halfway mark, and it was a planned rest/refuel stop.  It was also the point at which Aaron had to leave us so he could make it back to work in time.  Since I was feeling much better, I decided to keep riding. 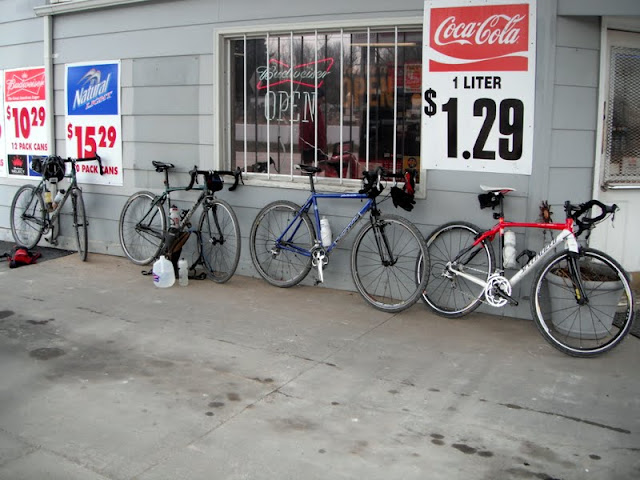 We got some odd looks here.

After saying good-bye to Aaron, we bought some snacks and beverages.  We talked about how much fun we were having and how Bob was totally missing the best ride ever.  Since Bob was at work instead of having fun, and since he was also trying to lose weight to avoid eating a can of ALPO, we decided the right thing to do would be to send him a pizza. 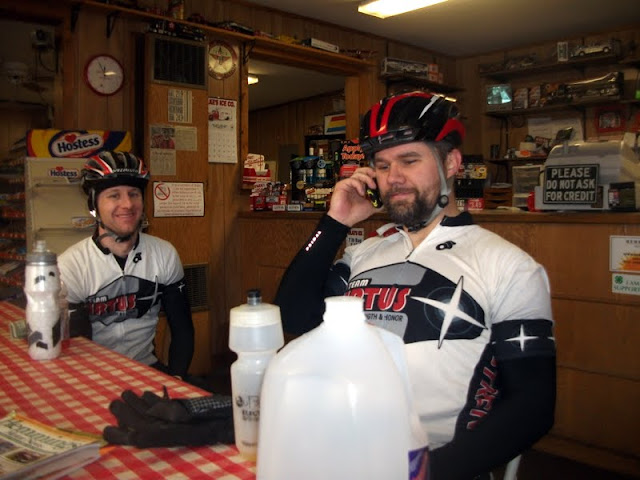 Look at Robby's face. We were laughing our asses off.

We ended up ordering him a Large “All the Meats” Pizza from Papa John’s and had it delivered to his workplace.  They wouldn’t let me leave a tip over the phone, but they said that I could just add the tip on the receipt.  I was a little worried that Bob would leave the delivery person a 50 dollar tip, but it was a risk I was willing to take.

With some food in our bellies and our water bottles filled up, we headed back out for more sweet, sweet gravel.  The sun broke through the clouds, and the temperature neared 60 degrees. 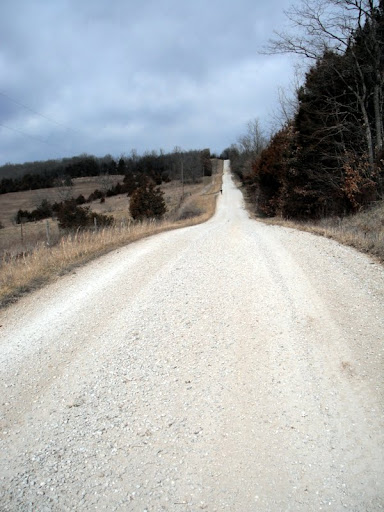 Part of the ride had some very fresh, loose gravel.  It’s always cool to ride some virgin gravel, but it makes it much more difficult to ride since it is so rough.  Now, when I say it was fresh, I mean it was still being smoothed out as we were riding.  Seriously. 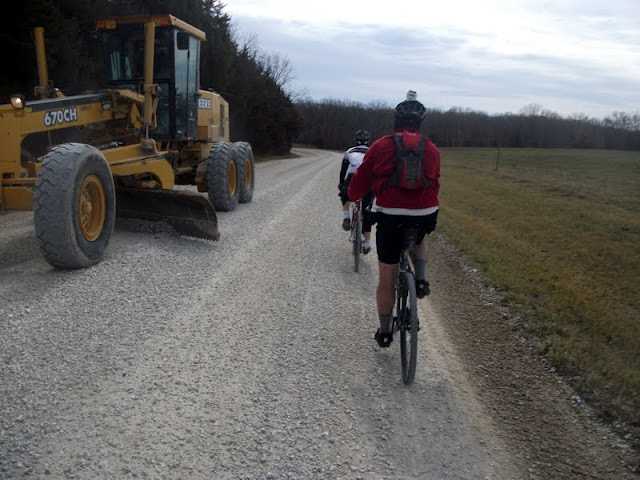 We kept riding, talking, laughing, and waiting to hear from Bob after he received his free lunch.  The anticipation was killing us.

Finally, after what seemed like forever, I received a text message from Bob.  Here is how it went down: 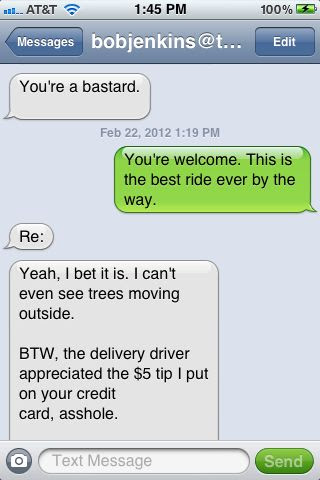 Thankfully, Bob “only” gave the driver a $5 tip.  It was more than I would have normally left, but it was worth every penny.  We laughed our asses off again.  Later he said he was pretty confused when the delivery girl showed up asking for Bob.  When he heard that I had already paid for it, he figured it out.  And then he ate half of the pizza.  In all honesty, though, I felt kind of bad for sending the pizza.  It was hilarious, but we really did miss Bob.  It’s just not the same without that guy.  I can’t quit you, Bob Jenkins!

Anyway…  Shortly after getting the text from Bob, we rolled into Tebbetts, MO.  The Turner Katy Trail Shelter is there, and it’s a really cool place where Katy Trail riders can stay.  Unfortunately it was closed, so we didn’t get to check it out.  We took a short break, ate some food, and then headed back out onto the gravel flats near the Missouri River. 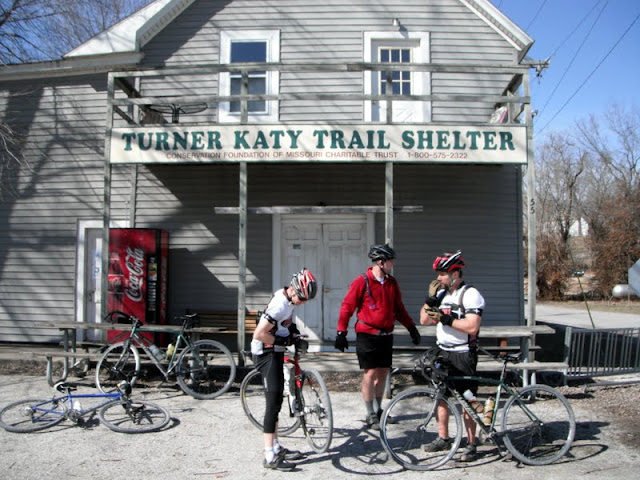 Even though this was still fun to ride, it was definitely the worst part of the ride.  The wind was simply ridiculous as it always is when I ride the gravel flats.  It was in our faces the entire 15 miles or so back to the cars. 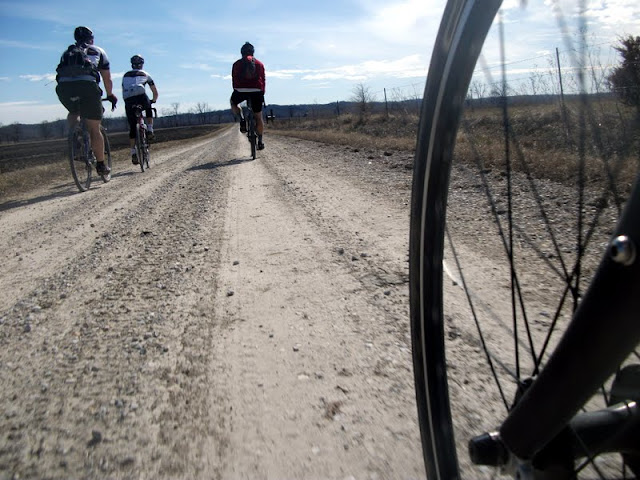 At one point, we passed some big mounds of dirt where some kids were four-wheeling.  Casey was literally almost run over by a four-wheeler, and in the process of trying not to die, he ran into Robby Brown.  I’m not sure how Robby, who is basically half the size of Casey, didn’t crash, but he somehow managed to stay on his bike.

Now, it could have been an honest mistake.  The kid may not have seen us coming.  I could have forgiven that, but then the kid turned his four-wheeler around and sprayed Casey and Robby with dirt as he pealed out.  This was inexcusable.  In my younger days, there would have been a physical altercation.  But these were just stupid teenagers who had no idea how close they came to being beaten to death.  Remember, Casey is an MMA figher.  Don’t believe me?  Here’s a video of one of his fights (and yes I get a little carried away with the yelling).

It could have been a much more entertaining story, but we did the mature (and less fun) thing and just rode away. 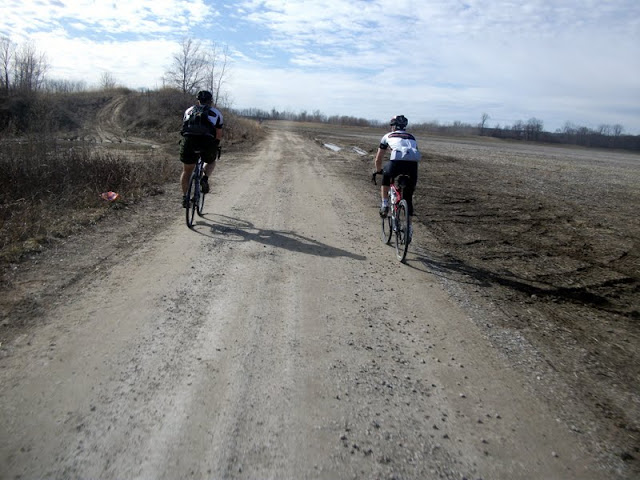 Shortly after this, Casey and Robby dropped Adam and me pretty quickly.  In our defense, they had gears while we were on single speeds.  I doubt I could have kept up anyway, though.  The wind was just killing me.  Adam and I kept looking at each other in disbelief of how strong the wind was.  It was perfect training for the Dirty Kanza 200. 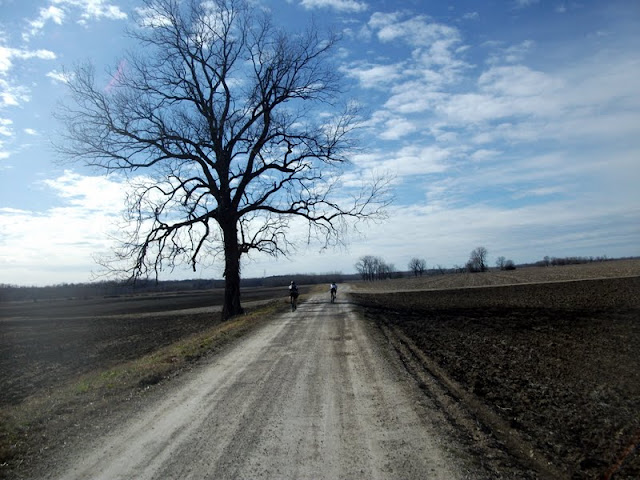 This was the last time we saw Robby and Casey until the end of the ride.

Even though photos never do justice to how cool it really is to be out there, I’ll leave you with a few (and there is a video coming soon, too): 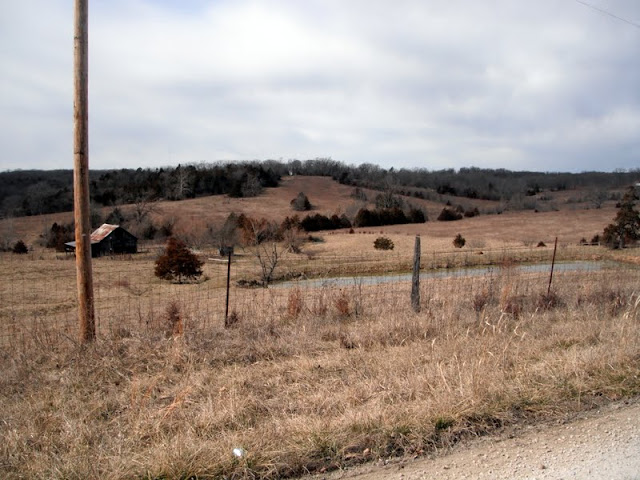 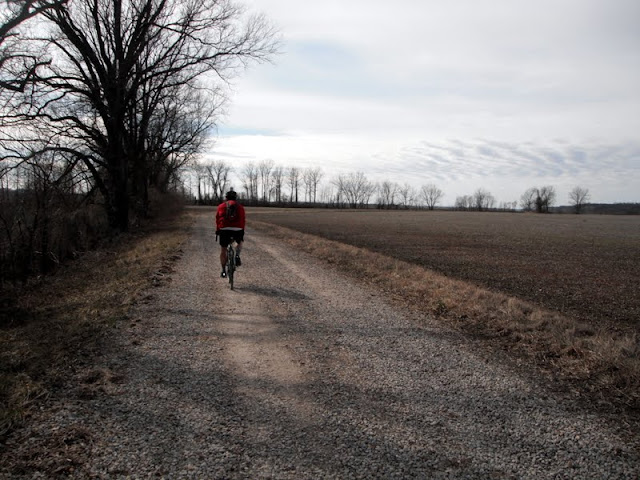 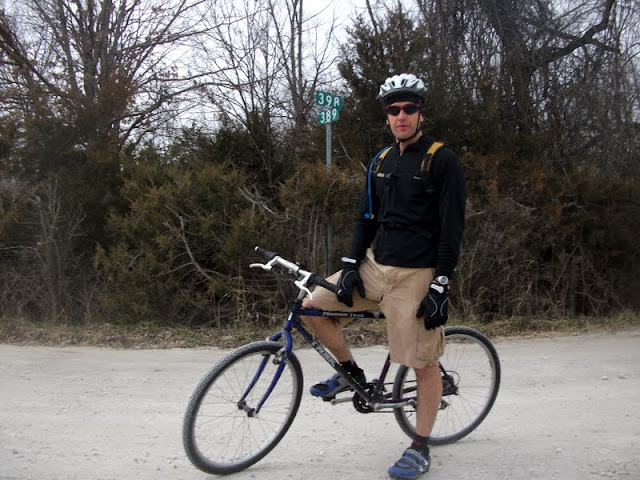 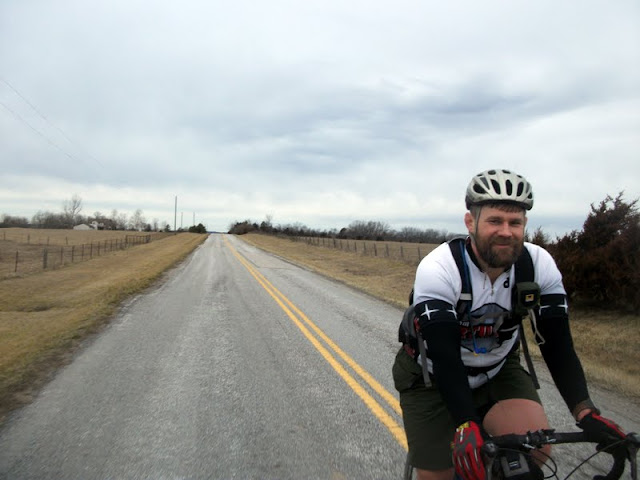 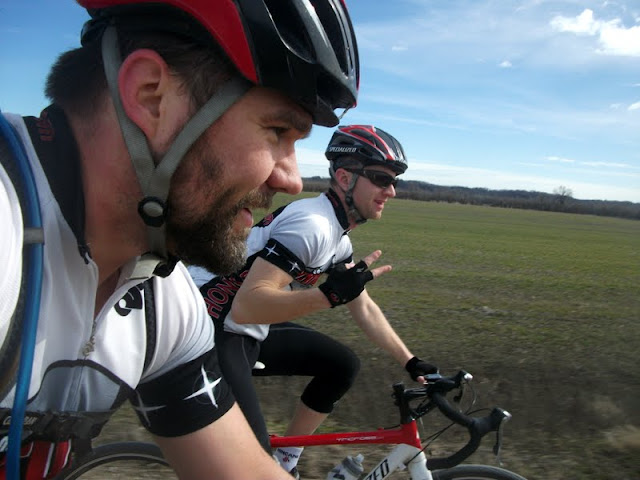 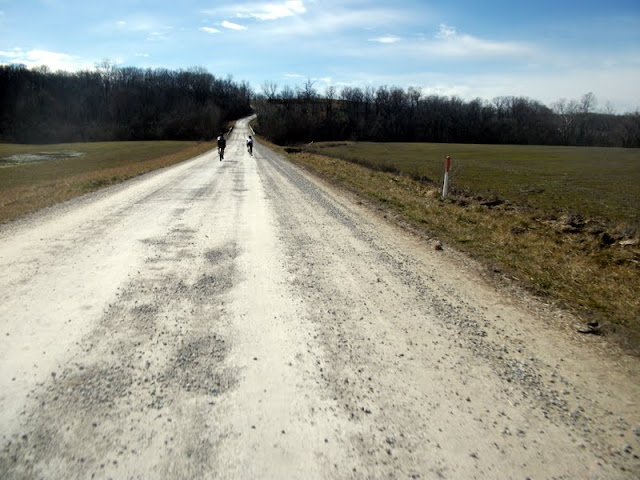