***A Note From Luke: This post was originally published on Kage’s personal blog, which you should read regularly. However, we feel that our site needs a feminine touch now and again, so we wanted to share it with all of you Virtusites who may not have seen this before. We’ve had many laughs regarding the Go Girl, and it still cracks me up (yes, I’m still a 3 year-old boy at heart). I’ve added a comment or two in blue. So here you go. Enjoy.***

A note to my more sensitive readers: this is a post about pee, especially peeing outside. In it, I reference pee more than your average 3 year old boy. If the topic of pee offends you, or you simply prefer not to read about pee, let me refer you to some more ladylike topics:

Still here? Ok, then. Alert readers will remember that on the way down to Tennessee for the LBL Challenge adventure race (oh, please…you didn’t really think I was done talking about that, did you?), Bob picked up a little gift for me at Gander Mountain: my very own Go Girl (“Don’t take life sitting down!”) so that I could pee standing up and feel like one of the guys.

While I was less than excited, they found the whole thing hilarious. So entertaining that, even though I (wisely, as it turned out) refused to try the Go Girl during the race, every. single. time. I went to the bathroom that weekend Luke would say, “You go girl!” Which didn’t get old at all. 🙂 Since Bob had spent his hard-earned money to extend my urinary options, though, I promised to try it out at home and report back.

Luke: I still think it’s hilarious, and I STILL yell, “You go girl!” whenever Kage needs to stop for a pee break. 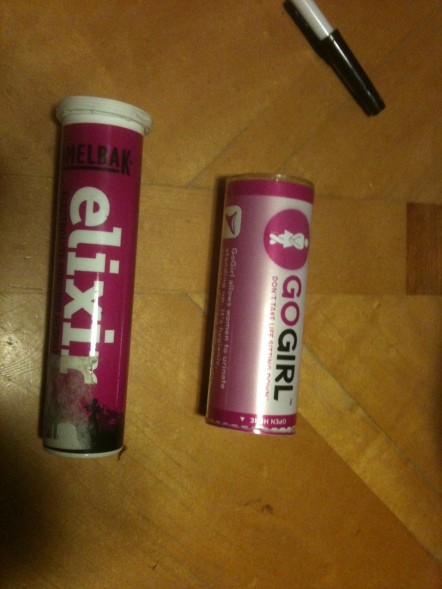 It freaked me out a little to see how similar these containers were. I certainly wouldn’t want to be dumping my Go Girl into my water bottle…

I guess this is as good a place as any to mention that my husband thinks this whole review is a bad idea, that you’ll think I’m weird, and that I’m inviting the wrong kind of attention. I’ve assured him that my weirdness is a well-established fact, but I would appreciate it if the psychos stayed away, because the only thing worse than being chopped up into little pieces by some sit-to-pee fanatic would be having to admit that Jeff was right.

The Go Girl wasn’t an entirely new concept to me; I’d read a mention of it in Athena Diaries (I think) some time ago. The line that sticks in my head is “she peed off a cliff and it changed her life”. Appealing as that thought might be, my impression was a bit less enthusiastic. You might say I wasn’t yet sold on the technology.

My initial thoughts: This seems like too much trouble. Do you have to put it away wet? Gross. How exactly does this work? Wedge the thing into your pants? Otherwise you’d still have to pull pants all the way down, which doesn’t help any in the privacy dept.

A little research turned up this hilariously bad video. I warn you, it’s minutes of your life you’ll never get back. It did, however, clue me in to the idea of using a water bottle to rinse out the Go Girl, because it seems mighty wasteful to spend $10(ish) on a single use item.

Once I’d watched the video, it was time to begin the testing. 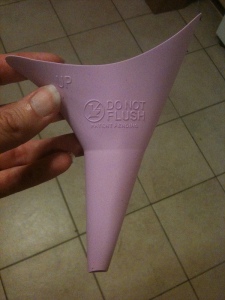 Trial 1: at home in the bathroom with my skirt pulled up and the rest removed, just in case (a good plan, as it turned out). There’s a bit of a learning curve. You definitely don’t want to wait until the last minute when you really have to go. As there’s not much of an opening at the end, it fills much faster than it empties.

Luke: This makes me think of Mrs. Doubtfire peeing standing up. Hey, maybe Mrs. Doubtfire would be another good nickname for Kage since they’re the same age. 🙂

Bob: That picture bothers me; I feel like I’m looking at Kate’s penis or something. 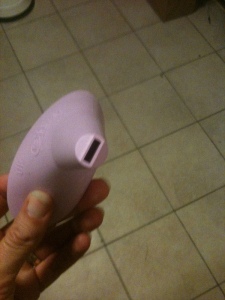 It’s kinda like emptying a bathtub into a thimble.

Oh well…it was probably time for me to clean my toilet…and my floor.

Bob: That picture is even worse; it’s like Kate’s Wenis is looking right at me. *shudders* There’s probably a “deluxe” version with a bigger pee-hole.

Overall, the whole experience was weird. Standing up to pee felt very unfeminine. Because of the fill/drain lag, the pee sound continues for a while after you stop going. And I had to put the toilet seat down after I used it…which is just wrong. The aim part, though, wasn’t difficult at all; I don’t know what guys’ problem is.

Luke: In my house, where I am King of the Castle, the girls have to leave the seat UP for my son and me. Okay, that’s not true. I’m in such a habit of putting the seat back down for my wife and daughters that I even put the seat down at work and in public places. I know… I need to hand in my man card.

Impression so far: no thanks. I was way less dressed and more exposed than using the squat behind tree method.

Trial 2: at home, wearing skirt but no underwear. This trial went better: no spillage, but I had to pee realllllly slowly to prevent it. If I had to pee RIGHT NOW I would totally have had a flood. Between keeping clothes out of the way and holding the Go Girl in place, wiping and such is hard to coordinate. Still thinking it’s more trouble than it’s worth.

Trial 3: at home, skirt and panties on. No spills, but I felt exceedingly unladylike. (Kind of funny in light of Bob telling me during the race that my sneeze was “the most feminine thing I’ve ever heard you do.” He later amended feminine to girly, which is a little better, but clearly I don’t come off as ladylike.) Also, standing up to pee eliminated that valuable phone-checking time you get while sitting (what, like you don’t do that too?)

Note: this is not the tool to use if there’s any question of exactly which # you’re there for. No such problems occurred, but it was a little scary. The test, however, was a success. Ready for field testing…I guess.

Trial #4: field testing during trail maintenance. The nicely overgrown woods made for good privacy…much better than the bare winter trees. I’ll admit, it was nice not having to pull my pants all the way down, but it still felt kind of weird. Since I was wondering about the time involved in using the Go Girl (also available in khaki!!!) instead of the squat method, I timed myself using it. It took me 1:49 to take out, use, and pack back away GG (in the conveniently included bag since I didn’t have a water bottle for rinsing). Once again, the Go Girl took forever to empty once I was finished peeing. I’m planning a slight modification to see if I can improve that situation.

The verdict: After fairly extensive testing, I can’t say that the Go Girl is going to be a regular part of my bathroom arsenal. As jealous as I am of the guys’ ability to turn away, whip it out, and pee right on the side of the road, even with the Go Girl I’m just not likely to do that. In my opinion, it’s a lot simpler to find a spot, pee, and then catch back up rather than mess with getting something out, using it, then cleaning and repacking it.

That’s not to say that Bob wasted his money, though. I can definitely think of some times the Go Girl would be beneficial. For example, I can’t wait to take it with me this next winter.

I’ve always wanted to pee my name in the snow

Luke: Although Kage may never use the Go Girl again, we will keep its memory alive by saying, “You go girl!” when she pees at a race… every. single. time.

And if my husband ever gets sick of me, the Go Girl could certainly come in handy getting rid of those pesky one night stands who just won’t leave. (Thanks to Mike for the video!)

(Disclaimer: I was given a Go Girl for free, courtesy of Team Virtus and primarily for their own amusement. I did not pay for Go Girl, receive payment for this review, or agree to give a positive review. Aside from information gleaned from the company website, the opinions are my own.)

(Disclaimer (b): I stole this disclaimer from Midwest Multisport Life because I’ve never actually needed to make one up before.)