← The Thunder Games
Berryman is almost here…and fun with hyperlinks →

Back in the Spring of 2011 at the High Profile Adventure Camp, Bob Jenkins rolled over anyone and everyone who stepped up to challenge him to a tether ball match.  The tournament culminated with a championship match between Bob and Brian of Whiskey Tango Foxtrot Adventure Racing.  It didn’t end well for Brian:

Brian’s face got up close and personal with the ball as Bob struck the final, winning blow.

Ever since the total annihilation of Brian, there has been talk of a rematch.  It was supposed to go down at this year’s camp, but Team Virtus had a date with the LBL Challenge.  When we heard The Thunder Rolls Adventure Race would be held at Camp Benson, the same place the Adventure Camp is held, we knew that Bob would once again have to humiliate Brian.  This time, however, Bob would show no mercy.  He would sweep the leg if he had to, but there was no way he was going to lose to Brian.

Brian, being the cocky, arrogant SOB that he is, showed up to Camp Benson in this awesome t-shirt made by his awesome wife, Melanie:

Not only is Brian’s wife talented, she has put up with Brian’s shenanigans for WAY too long.

Unfortunately, the tether ball poles at Camp Benson were just like Brian and Todd… Lacking balls.  We were all very disappointed, but we focused our energy on the 24-hour Thunder Rolls.  It was one helluva good race (read part one of our race report right here).

After suffering a severe scratch from a thorn and still managing to somehow survive the race, I began packing the Virtus Van the following morning for the long drive home.  That’s when Todd spotted my Wal-Mart bag full of the nastiest, skankiest, dirty race clothes you’ve ever seen.  He asked to borrow it, and I knew what was about to happen.

Ingenuity at its finest!

Bob, being the champion that he is, offered the serve to Brian.  He slowly pushed the scum-ball towards Brian when Brian immediately (and illegally I might add) smashed the “ball” back at Bob with no warning.  Bob, with cat-like speed and reflexes, returned the serve, and the “game” was on.  After two or three hits, Brian tore a hole in the “ball” and my nasty laundry flew everywhere.

Bob was willing to try to find a replacement “ball” with which to continue the Death Match, but before he could do so, Brian quit and declared himself the winner (he’s gotten pretty good at this).  You can read Brian’s fictional version of this match right here.

Regardless of the lies you’ve heard, the Tether Ball World Championship Death Match (TBWCDM) never happened.  The “ball” was not a regulation ball, Brian used an illegal (and dirty) serve to start the non-regulation match, and then he quit before we could continue.  While it was a riot watching them bat at my smelly clothes like a couple of kittens hopped up on catnip, it was NOT a real match.  Even if it was a regulation match, which it was not, Brian didn’t win it anyway.  And don’t let anyone tell you otherwise. 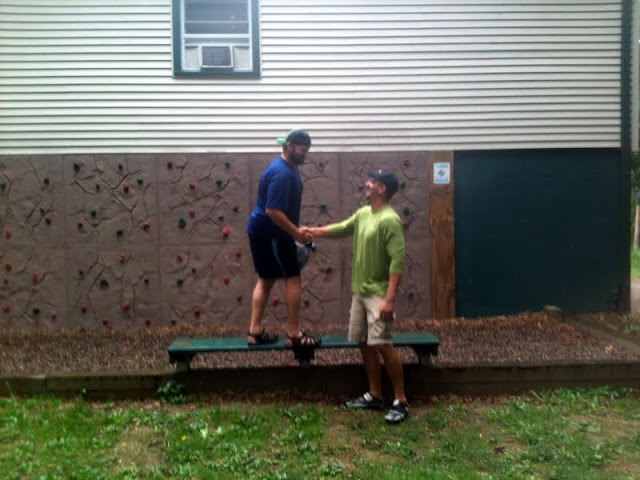 Bob still showed his dominance over Brian in the post-non-match handshake.

There will be a true TBWCDM!  There must be a TBWCDM!  All of you Virtusites deserve some closure.  And Brian needs to be silenced… Just like he was last time there was a real match.

Face smashed and flat on his back… Just like he’ll end up when there’s a REAL rematch.

← The Thunder Games
Berryman is almost here…and fun with hyperlinks →