← And then there were 10
The Monster Ride is this Weekend!! →

Sleepless in Steelville, the Eve of Berryman 2012

As much as I hate to do it, I’ve gotta break this report into fragments. For whatever reason, my employer seems to think my talents are better used “working” instead of AR-blogging during business hours.  The following is a brief account of the hours leading up to our domination of the 2012 Berryman 24 hour Adventure race. And by “domination”, I mean we didn’t die.

At a table littered with empty fast-food wrappers, Travis and I sat in the Hardee’s dining room plotting UTM points. The 2012 Berryman 24 was happening the next day, and we had redemption on the brain. A full year had passed since our “Four Points Debacle“, and while it was surely on our minds, there was no talk of the past. We spoke only of the grandeur that lay ahead.

Brimming with confidence and the lofty goal of a top 3 finish, we had once again found ourselves drunk with confidence. Countless emails had been exchanged in the preceding weeks, and the phrase “if we can just run a clean race..” had been repeated over and over again. Hope had become certainty, and for better or worse, we’d let ourselves believe it was going to happen. Tomorrow would be a BIG success; of this we had no doubt.

With each plotted CP, another piece of tomorrow’s quest was revealed. It was clear we’d be covering a lot of distance tomorrow. The mileage on the bike leg alone was… respectable. That was fine though, after all our Dirty Kanza training earlier in the year, we were confident the bikes were our strong-suit. My excitement came to climax when we confirmed that all 13  miles of Council Bluff’s bitchin’ singletrack would be used on the bike leg(s). Council Bluff was the first course I ever raced on, and I’ve had a lot of good times there.  I think it was ’09 when Corey, Big Gay Bob and myself took home buckles in the clydesdale division. And I may or may not have whipped Corey’s ass at the Rimwrecker there in ’08, but it’s not like I’m gonna hold that over his head until my dying day.

Course plotted, we drove back to camp and managed to be in the sack by 11:30. Of course, this only gave me more time to lay in the sleeping bag and stare restlessly at the sky. Sleeping on the ground was so much better before I got fat, but hey, at least I forgot my pillow.

Frustrated at my inability to sleep, I watched the stars and let my mind wander. It dawned on me that we really hadn’t shown this race the proper level of respect. The Berryman is notoriously difficult, and this was gonna be Travis’s first 24 hour race. It made me nervous that we weren’t nervous, but there would be time for all of that tomorrow.

Morning finally came, and for whatever reason I was awake 15 minutes before my alarm went off. Trust me, that’s not the kind of thing that happens everyday. Resisting the urge to go back to sleep, I decided  to head for the camp commode. Much to my surprise, I’d gotten there before a line had formed. Man, I felt like such a grown-up… until I opened the bathroom door.  With a dropped jaw and bulging eyeballs, time literally froze as I realized I was standing face-to-face with a  half-naked man sitting on the toilet.

He hadn’t locked the door.

Well, this is awkward.

Thankfully he was wearing a headlamp, so all I saw was a defecating silhouette. That being said, my imagination has a nasty habit of filling in the blanks. Without missing a beat, the mystery dumper, (keeping his headlight steadily in my eyes to secure anonymity) , said “Sorry dude.”

No other words were spoken;  I quietly closed the door and got the hell out of there.

So,  just to recap: I do NOT know who you are, Mr. Mystery Dumper, and I think it’d be really cool if we could keep it that way.

I’d say this is a great time to change the subject, so let’s fast forward to the final minutes before race-start

In the final minutes before race-start, the crowd of racers was large: 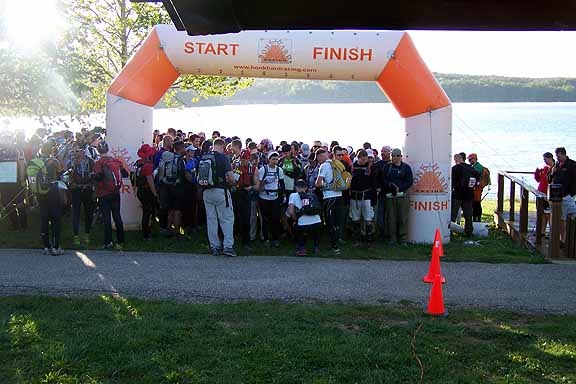 I’m pretty sure that’s Emily on the front row

Our esteemed colleagues from the Orange Lederhosen cult are always a welcome sight, and I do believe Derrick has been trimming down. Emma was rumored to be somewhere on course, so we could only hope she’d have “provisions”.   Speaking of distinguished, I had the pleasure of crossing paths with several CAC veterans. Folks like “Iron Man” Chuck Vohsen, male-model Steve Willi, (my mom thinks he’s hot), and the recently expedition-tested Team Wahoo. The Hoosier Daddies were also present, albeit without any alcohol. I’m sure that won’t be the case at Castlewood, though.

The Hoosier Daddies. If you received free whiskey, brandy, port wine or bratwursts on the course during Cedar Cross, it probably came from one of these fine Americans.

My mojo must’ve been through the roof,  because I managed to get a 2-word conversation with Awesome-Butt Girl. As long as we’re on the subject, a lot of people have asked me about “ABG’s” true identity. I’m sorry to say it, but that information will never be revealed here. Firstly, knowledge is power. A woman with that knowledge could use her powers for evil, and I don’t need that weight on my conscience. Secondly, we don’t want to objectify anyone… I mean, I certainly wouldn’t want a bunch of people calling me “Awesome Abs Guy.” I’m not a piece of meat.

(Right to left) Kate, Travis and myself. And yes, my abs are amazing.

Swiftwick sleeves were donned, Bodyglide was applied and much pre-race wind was broken. The National Anthem was sung and  race director Gary Thompson unleashed 200+ racers onto his AR masterpiece.  The Berryman had begun.

← And then there were 10
The Monster Ride is this Weekend!! →