First, I’d like to say happy New Year to all of you Virtusites out there!  I hope it’s the very best year for all of you.

We’ve been a little quiet here on the blog lately.  Well, we’re going to try to fix that.  I need to finish several race reports, and I need to write a couple of posts about upcoming events (like the SHITR on Saturday and the MLK2 Ride the Saturday after that).  But to whet your appetite, I thought I’d do a quick post on yesterday’s goings-on: The Soda Mile followed by some trail running. 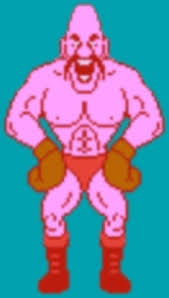 Obviously Soda Popinski would have won the race had he been there.

After yesterday, I can proudly say that I have surpassed Kage with the highest miles-driven-to-miles-raced ratio.  Her previous best was driving from Edwardsville, IL to Jefferson City, MO for the Kicks in the Sticks race.  That’s roughly a 150 mile drive to run 7.5 miles for a ratio of 20 to 1.  Well yesterday, I drove from Jefferson City to Edwardsville for a ONE mile race for a ratio of (for those of you who are mathematically challenged) 150 to 1.  That’s gonna be hard to beat.

Why would I drive that far for a one mile race?  To support a friend of course.  But also because it sounded like a blast.  It was a soda mile to benefit a friend’s son dealing with cancer.  I had never even heard of a soda mile, but once I understood what it was, I knew I had to go.

Here are the rules:

I was up in the first heat, and there were some young, thin, fit high school runners in my heat.  Although I knew I wouldn’t be anywhere near the podium, seeing these young, fast dudes confirmed it.  But there was something else I could do better than these young whippersnappers.  I could out-chug them.  My only goal was to slam my diet 7-Up, get the hole shot, and be the leader through turn one – just like Bob does at every cross race.

This is how you should warm up for a Soda Mile. (Photo Credit: Diane Dudding)

Taking the early lead was so easy I almost felt bad for the young bucks.  I pounded the soda, smashed the can in my hand like a man, threw it down, and took off running.  For a brief second, I thought about trying to run the mile as hard as I could.  Then my right calf tightened up, and I reigned it back in.  Not that it would have mattered.  The other guys were much faster than I was.

As I was belching my way over to the straight-away on the track, I heard some monstrous burps behind me.  It was a young guy who went on to be the overall winner with a time of 7:48 or something like that.

I finished lap one, grabbed another soda, and chugged as much as I could.  It didn’t go down as easily as the first one, though.  The third and fourth sodas went down a little more slowly as well.  The first 100 yards after each soda was always the worst.  I tried to open up my gut and throat to let as many belches out as possible.  Every time I hit the straight-away on the other side of the track I would be burp-free, and I could actually run full-speed again (although I wasn’t exactly crushing it since I wanted to save my calf for the trail running later in the day).

I passed a couple of younger, faster guys on the side of the track barfing.  It was hilarious.  I finished in 10:49 or so.  It was one of the slower times in my heat, but that’s okay.  That’s not what this event was about.  It was about helping a friend and having fun.

This and other shots prove that my running form is improving. I have a LONG ways to go, but I’m no longer a heel-striker. (Photo Credit: Kage)

Kage was up next, and she was not really looking forward to drinking the soda and possibly barfing.  But would that stop her?  Absolutely not.  We all knew that Kage was going to step up and chug 4 sodas and run the fastest mile of the day.  And here’s a video to prove it:

Kage finished the first lap with no problems.  There was no barfing.  I know…  Disappointing.  Before Kage started her second lap, Patrick and I informed her that she had not actually finished the entire can.  Well, here’s what she thought about that:

I don’t think she cared about what Patrick and I thought.

Kage probably drank half of each can (if we’re being generous), and she finished her mile in 25 minutes.  Okay, that’s not true.  I actually don’t know what her time was, but I think it was around 9 and a half minutes or so.  And it didn’t really matter that she didn’t drink all the soda.  The spirit of a soda mile is all about fun.

Our friend Sara – who broke out of prison with us – was in the last heat of the day.  I think she actually drank all four of her sodas and successfully completed the mile without barfing.  She rocked it!

She’s WAY too happy to be on her fourth Orange Soda.

The soda mile was a lot of fun.  It was very laid back, and no one took it too seriously.  The top three runners received their awards: Six-packs of soda.  We later found out that the event raised $2,511.00 for our friend Lindsay’s family.  And that is very cool.

After the race, Kage and Patrick (of 100+ Project fame) were nice enough to take me running on their local trails.  The trail through the Big Woods was fantastic.  The other trail was great too, but I really enjoyed the Big Woods.  I won’t bore you with the details, but here is a synopsis followed by some photos:

And now for the photos:

The beautiful trails were practically right on the SIUE campus.

Although it looks like I’m trying to poop, I was actually trying to lift an old cable left behind from the Mississippi River Festival.

The SIUE campus has lots of different sculptures to keep us entertained. Here we see Patrick the Future Failure.

No, she wasn’t trying out for “Showgirls 2: Maw Maw in Vegas.” Patrick noticed this and said, “Hey, we should put Kage in a cage.” So we did.

While Kage was taking care of bidness, Patrick and I spotted the elusive Lukesquatch.

Don’t forget about the SHITR on Saturday and the MLK2 ride next Saturday!  I hope to see you there!