Come Run With Us! – The Ava Brown Memorial 5K

Hello once again to all of you Virtusites out there!  I’ll keep this one short today (no, seriously).  In two weeks, on April, 13th, The Ava Brown Memorial 5K is being held here in Jefferson City, MO. For those of you who don’t know why this race is so near and dear to us, please go read this post right here.  Every time Spring rolls around, I go back and reread that post, and every time I read it, I break down and cry a little bit.  It was one of the most difficult things I’ve ever written.  You should also read all of the comments on that post to see how amazing our friends and families are.

Two years ago, Team Virtus raised over $1000.00 for this great event!  ***WARNING! – the previous link contains a photo of me half-naked.  You’ve been warned.***  While we aren’t doing the same type of fundraising this year, we’d still love to see you at the race.  If you can’t come out and run or walk but you’d still like to help us fight SIDS, you can donate here.

Rumor has it that Kage has been training for a 5K PR.  Will she get it at the Ava Brown 5K?  If you know Rage Kage, then you wouldn’t bet against her.  And the good news is, she’ll be in a new age group this year!  She will hit the big Five – Oh about a week before the race, so even if she misses her PR, she has a good shot at placing in the top three in her new age group. 🙂

So, we hope to see you out there in a couple of weeks.  I’ll be running for Ava and for my nephew Benji.  Will you join us?

Good morning everyone, Bob Jenkins here, reporting to you via my new cell phone (gasps) regarding the status of CAC2, “The Second Coming”.

As one might expect, the recent snowfall has made course setup..interesting this year. Robby and I went out yesterday to hang our newly acquired and  totally legit CP markers

Personally, I could not be more excited that we no longer have to walk thru the woods carrying lengths of pvc pipe to make orienteering flags.

Things are coming along nicely,  and I have no doubt that this year’s course will be both fun and challenging.

Of note, we placed a flag yesterday that will likely pivotal to CAC victory. It’ll take some savvy navigating to find, and you could literally be standing on top of it and not even know. In fact, I’m completely open to putting a wager on whether or not Team WTFAR will ever locate it on their own with no help or GPS. 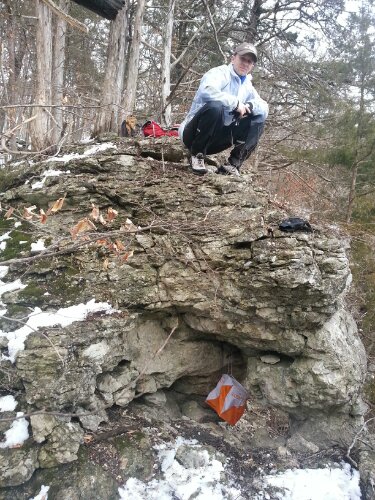 That right there is a natural rock arch. There’s no way Garrison is finding that thing.

In other news, a list of all required gear will be posted soon, and I hope you have some thorn-proof pants.

For those of you that missed it out on our CAC last year (read Kage’s report here, and our race report will be done… Um… Sometime in the next 10 years), you should be ashamed.  The first CAC proved to be much longer and harder than anyone (Bob and I included) could have imagined.  While our CAC might have worn people out, everyone left with smiles on their faces, completely satisfied. 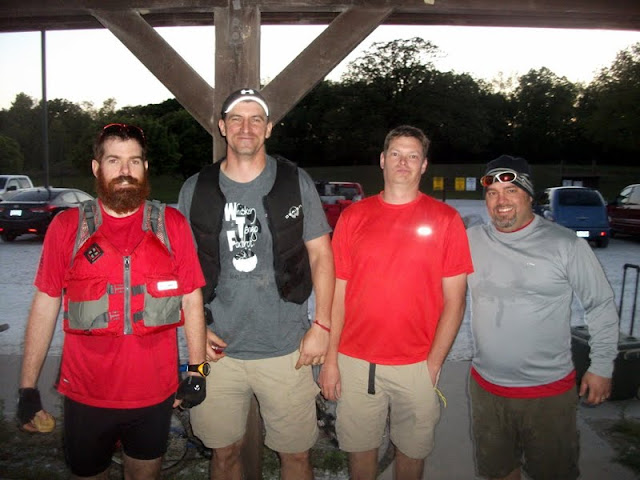 Well… MOST people had smiles on there faces.  Screw you, Todd.

The CAC will rise again, and trust me…  If you love having a good time, then you want to be all over this CAC.  This year’s CAC will be held (get it?) on April 6th, and HQ will once again be at the Pine Ridge Campground near Ashland, MO.  Camping the night before and the night after is free (because we have so much clout in Missouri), and last year it was ridiculously fun.  Just ask anyone who participated in the first CAC, and they’ll tell you that the camping was as much fun as the non-race itself.

The Carnage At the Creek Two (CAC2) is free (other than roughly 10 bucks for the map), and it will be roughly 6 hours.  Solos, duos, trios, quadros, or whatever kind of team is allowed. You will be hiking, trekking, running, mountain biking, hike-a-biking (maybe), orienteering, and you’ll possibly face a mystery event or two. 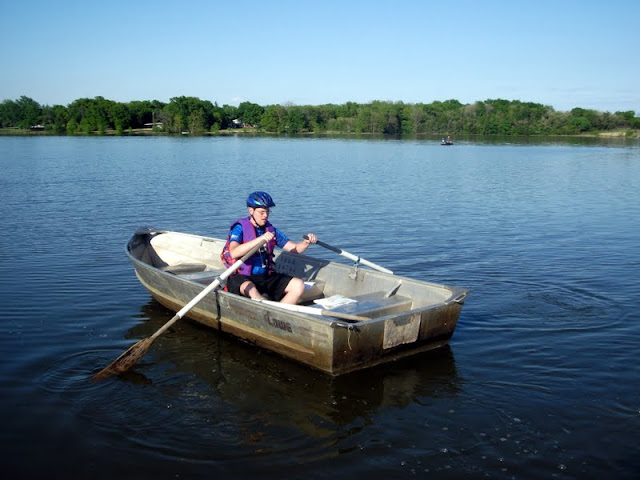 Dave man-handled the rowboat by himself. What a stud!

Unfortunately (or fortunately depending on how you look at it), the CAC2 will have no paddling event…

No, it won’t actually.

Even without a paddling leg this year,  our CAC will still be (ahem) unbeatable.  We will have many more details to come, but we need to know VERY soon if you will be joining us or not.  The sooner you let us know you’ll be there, the more likely we’ll have a map for you.  So let us know ASAP!

You can comment below, or you hop on the CAC facebook even page right here.  So please don’t be shy.  You know you’ll regret missing this when you here everyone raving about how much they enjoyed our CAC.  Don’t be a fool.  Come join us!

In the darkness with “The Darkness” 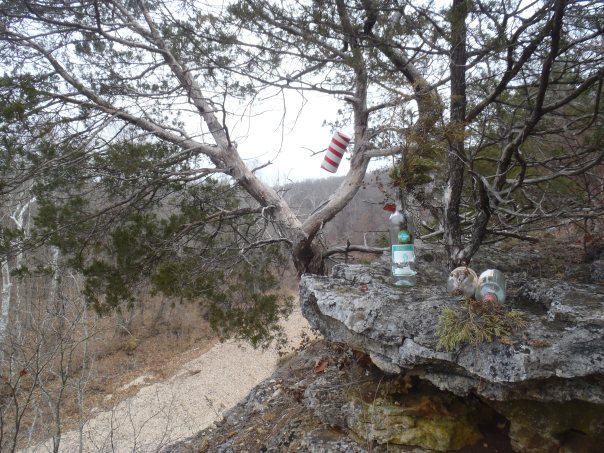 These days it seems like everybody’s too busy (or broke) to get out and race, and even when we do,we’re too busy afterwards to blog about it. With the recent shortage of quality posts, it occurs to me that our blog is quite idle. So while the following story isn’t my best work and doesn’t recount a race or something truly athletic..I think it’s worth talking about.

Due to a staffing issue in November/December, I was working just about everyday. So when I got a day off..I was going outside. On one such day, I was fortunate enough to have the same day off as my good friend Robby Brown, (aka The Darkness). This called for immediate action, so we made plans for an epic man-trip into the woods. Pretty exciting stuff if you ask me.

Prepping our gear at the trailhead, it was obvious that Robby had enough food and beer for the two of us. 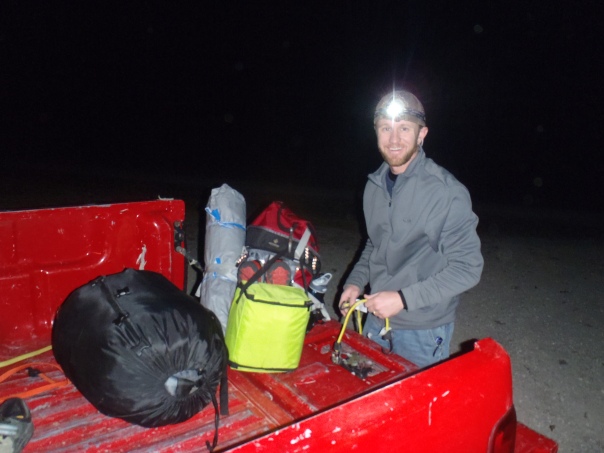 These woods are mostly foreign to Robby, save for the portion we used at Cedar Cross last year. It was fun to show off some of the cool landmarks I’ve found over the last 2 years, like this man-eating sinkhole.

Hiking at a spirited pace, it took us about 40 minutes to reach the evening’s campsite. With an already-built fire ring and easy access to Cedar Creek, this is one of my favorite places to camp. We built the fire, emptied our beer cans and ate peanuts while the rest of the world dreaded going to work the next day. Many, many stories were told around the campfire and maybe even a few we should’ve kept to ourselves. 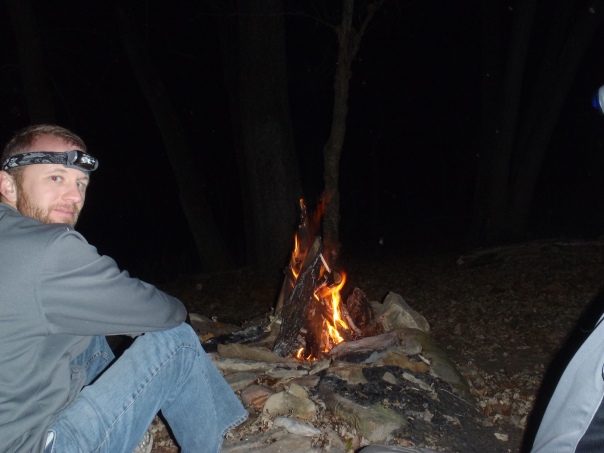 In honor of Luke’s absence, I took a “stream photo” of Robby.  Don’t ask.

The beers were flowing like wine and our spirits were high:

Sitting next to the fire, the moon was so bright we didn’t even need headlights. The wind was non-existent, so the flames and smoke all went straight up; it was pretty awesome if I do say so. 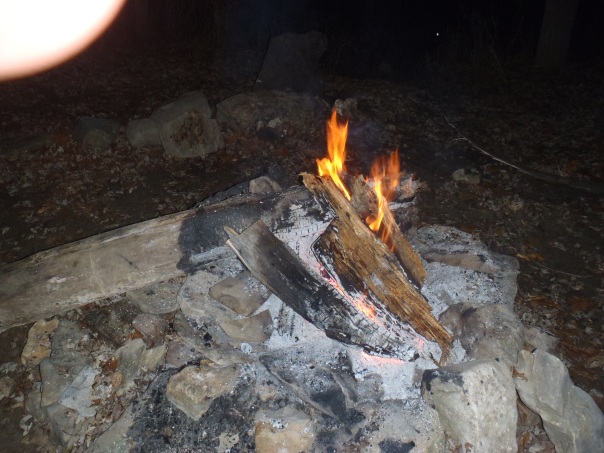 With the bottle still in my hand. Dad would be proud

and when morning came, it was to the tune of 2 well-deserved hangovers.

Seems like it would’ve been a good idea to pack some water with all that beer..

Hiking out, I showed Robby a few places that may or may not be part of the CAC2.

As we all know by now, the Cedar Creek trail is home to several trails that are not on the map. Typically, these trails begin and end at the same place, so when Robby and I got temporarily separated, (opposite sides of a creek), I told him to just keep hiking and eventually our paths would cross again.

As my trail ascended a large hill, his cut across a low-lying creekbed several hundred feet away and then branched left. By the time I realized I was on a trail completely foreign to me, Robby was nowhere to be seen. 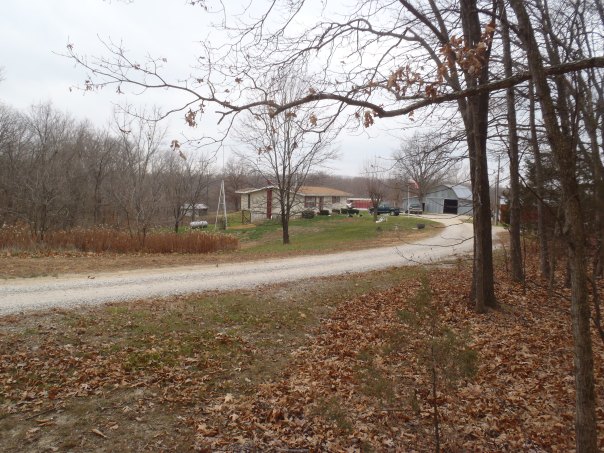 The trail I had taken came to an end in someone’s driveway. Seriously. I spoke with a man who happened to be standing in his yard, and he sent me on my way to the truck. I was only off by a couple hundred yards, and while it was exciting to find a new trail, I was somewhat concerned that Robby might take a wrong turn and never be seen again.

I got to the truck first and waited for about 5 minutes before I let myself panic. Leaving my gear in the truck, i got a drink of water and started running the trail. About 2 miles later I still hadn’t found him. That meant he was either back at the truck or halfway to Boydsville. Not really good news either way. Since I don’t own a cell phone, I had no way of calling him….until I ran across a pair of horseback riders.  I borrowed a phone from one of them and scrambled to the top of the nearest hilltop.

Me: Robby, hey where are you?

Robby: I’m sitting at the truck waiting on your ass.

So, I ‘spose I did a bit of unnecessary trail running, but it worked itself out in the end.  Gotta love the Cedar Creek trail. 🙂