I’ve heard that racing with your spouse can ruin a marriage. I’ve heard horror stories of couples nearly killing each other out there. But I’ve never had doubts about my marriage, and the High Profile Adventure Camp only made me realize how fucking lucky I actually am to be married to Becca. The weekend in Mount Carroll, IL only confirmed that my wife is indeed my soul mate… even though she literally wished she was with another man at one point, but we’ll get to that in a minute.

The original plan for Team Virtus was to all go to camp together and bring our significant others. It was to be an epic battle (and party) with all of us there. Unfortunately, this thing we call life got in the way. Work, children’s sporting events, medical procedures, and perhaps a touch of Antisocial Behavior Disorder kept many Virtusans and their partners from attending camp. But nothing would stop Adam, Michelle, Becca, and I from going. (EDIT: There was one more Virtusan there. Kate, as she pointed out in the comments below, was also there. She volunteered, and she kicked ass as the camp’s social media guru and helped clear the orienteering course.)

We saw a lot of our AR friends as we made our way through the painless check- in at Camp Benson, and we got our fantastic swag bags (worth well over $100 at least). Then we hauled all our gear down to our  cabin before heading back up to the lodge for burgers followed by Gerry Voelliger’s opening talk on all things Adventure Racing. 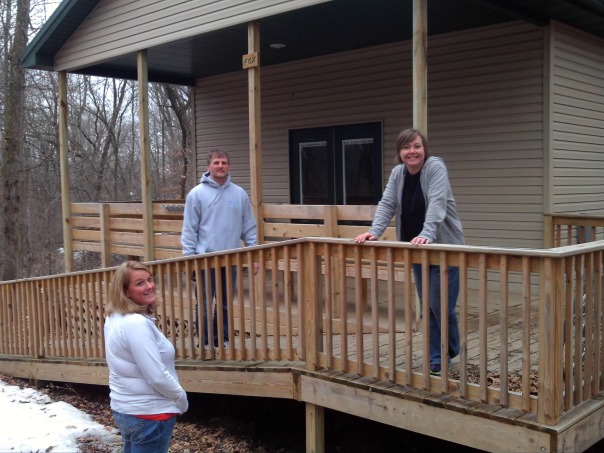 The ladies in front of our cabin.

After Gerry’s talk, I headed over for the advanced orienteering lecture (although I am anything but advanced). Adam stayed with Michelle and Becca for the beginner orienteering talk, and our friend and camp volunteer Dave Huntley promised he’d help out if Becca needed it. Big thanks to him.

It was great sitting next to our friend Scott Frederickson from Team Bushwhacker at the advanced orienteering lecture. He chimed in with some great pointers a few times, and anything I didn’t quite understand was easily explained by Scott.

After the lectures, we hiked back down to the cabin for some shut-eye. The flatulence was somewhat disappointing without our friends from WTFAR there and no Bob Jenkins, but Michelle almost made up for their absence. She can really rip ’em!

The next morning we practiced our orienteering skills at Palisades State Park. Unfortunately, the Mississippi was partially frozen over, so there would be no paddling practice for us. That’s probably a good thing since Gerry still uses this damn photo of us from our first year at camp in his opening lecture. That also meant we had more time to practice our navigation and, later, fixed ropes.

We decided we’d stay in a group of four for the orienteering practice. We headed straight up – and I mean straight UP – to our first checkpoint. On the way, we had to stop off at one of our favorite views, a spot we’ve visited every time we’ve gone to camp. 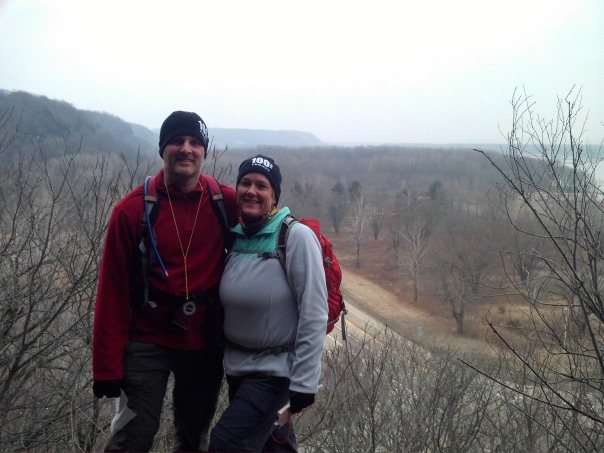 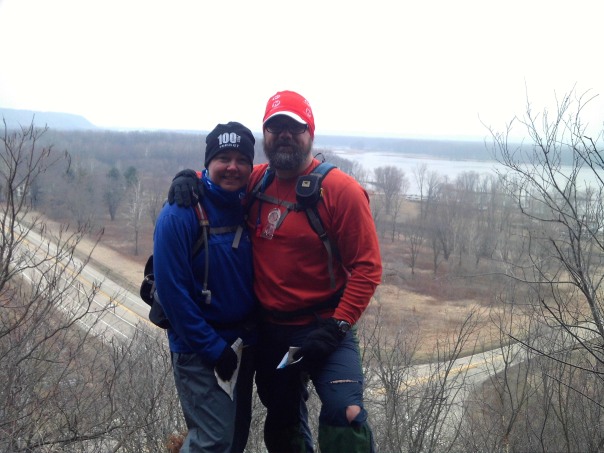 So beautiful. And the view ain’t bad either. (I apologize for the hard nipple in this shot. It was cold.)

We were mostly successful, although I led us astray on one point that other teams swore was not there. So of course Adam and I had to try and find it. That was stupid. We spoke with our friend and camp volunteer Kim Heintz later, and we figured out where we went wrong. Even though I’ve been doing this for over 10 years, I still have lots to learn and a ton of room for improvement.

Although we didn’t have a perfect run of CPs, I thought we were all having a blast. But then, as we were hiking, Becca turned to me and said:

Ouch. That one hurt. I tried to hide the tears, but everyone knew I was crushed. She’d rather be with my BFF than her own husband? Damn! That just killed me.

Becca claims that she thought she was boring me and that I’d rather have Bob with me instead of her. Don’t get me wrong. Bob always makes everything fun, but there was no one else I’d rather have by my side than Becca. (Cue the sappy music all you want, but it’s true.)

Becca and Michelle are brand new to adventure racing and orienteering, so it was good practice for them as well. They even lead us to one of the CPs without any help. For real! Check it out: 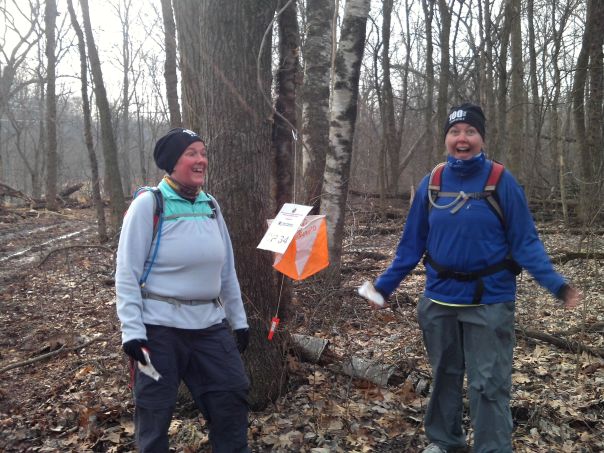 They were excited. Can you tell?

Being new to adventure racing, Becca tried to avoid using the woods as a bathroom (maybe we should get her a Go Girl?). She tried to hold it, but eventually had to succumb to nature’s call. Adam was a gentleman and turned the other way as Becca went behind a tree to take care of business. About 30 yards down the trail – literally – we found an outhouse which Michelle gladly used.

After another CP or two, it was time to go back to the Virtus Van and head back to Camp Benson. We stopped at McDonald’s on the way back, because there was a line at Subway. Believe it or not, we were running behind – shocker, I know! – so we opted for the quicker and much greasier burgers and fries than to wait in line at Subway.

Back at camp, Gerry gave the Ropes Safety Talk which terrified me the first year we went to camp. Then the one and only Robyn Benincasa gave a brief talk about paddling followed by some great, quick-hitters on AR gear, strategy, navigation, nutrition, and more. It was a short but jam-packed session as the knowledge bombs kept raining down on us. 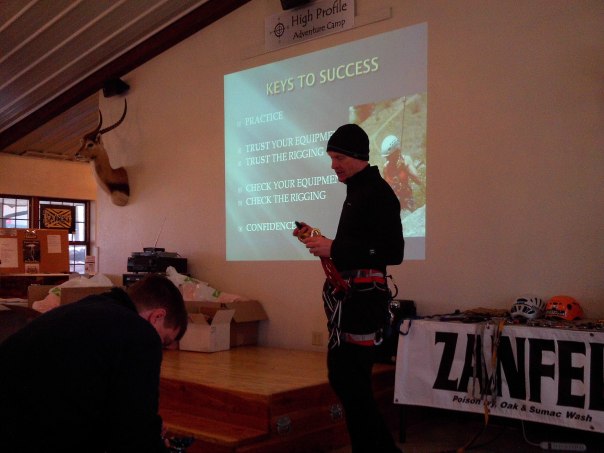 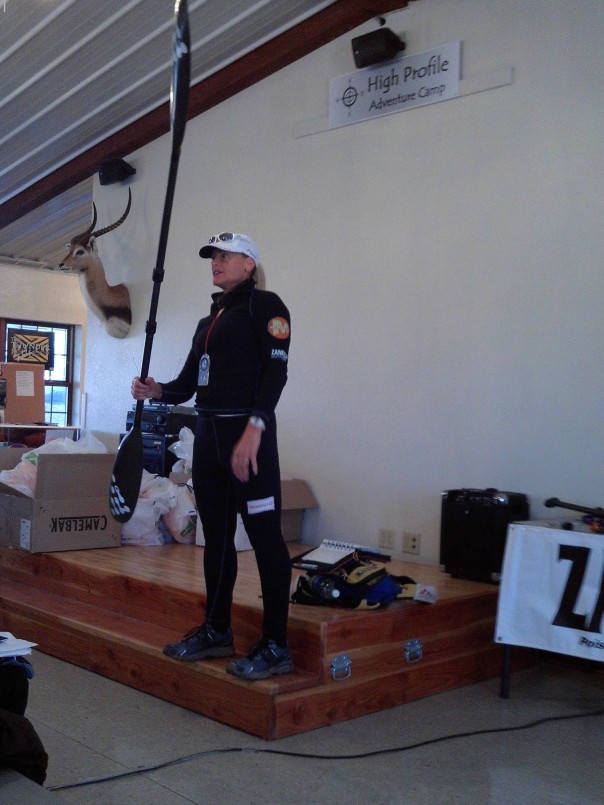 With 3 world records in paddling, I’m pretty sure Robyn Benincasa knows her shit.

And then it was time for the fixed ropes practice: rappelling, zip lining, tryolean traversing, and ascending (we skipped the rock climbing to practice more of the skills we’d encounter at the race the next day).

The first time I ever rappelled was at High Profile Adventure Camp, and I was flat-out petrified. I was nauseated and sweating profusely. I wanted to chicken out badly, but I didn’t. Even today, I get a little nervous, so I was expecting Becca and Michelle to be quite scared. Well, they weren’t.

After watching my wife give birth to our four amazing kids and pass kidney stones as easily as Bob passes gas, I already know she is way tougher than I’ll ever be. Watching her crush all of the fixed ropes proves she’s braver than I’ll ever be as well.

Rather than bore you with words, I’ll just show you how much fun we had on the ropes. 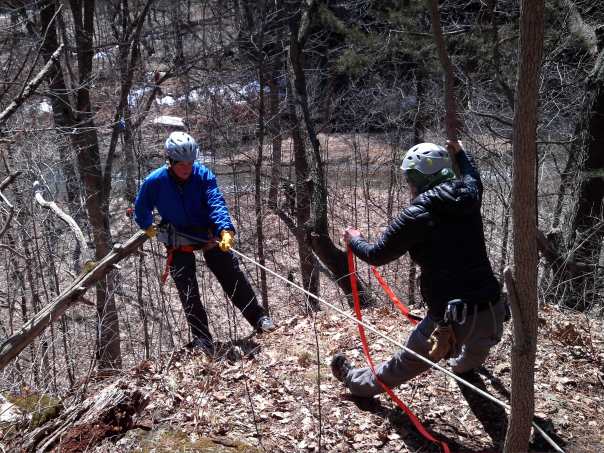 Michelle had rappelled before, but it was a LONG time ago. She rocked it! 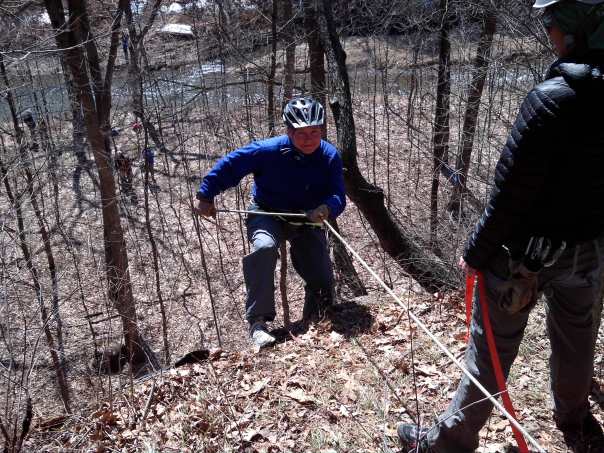 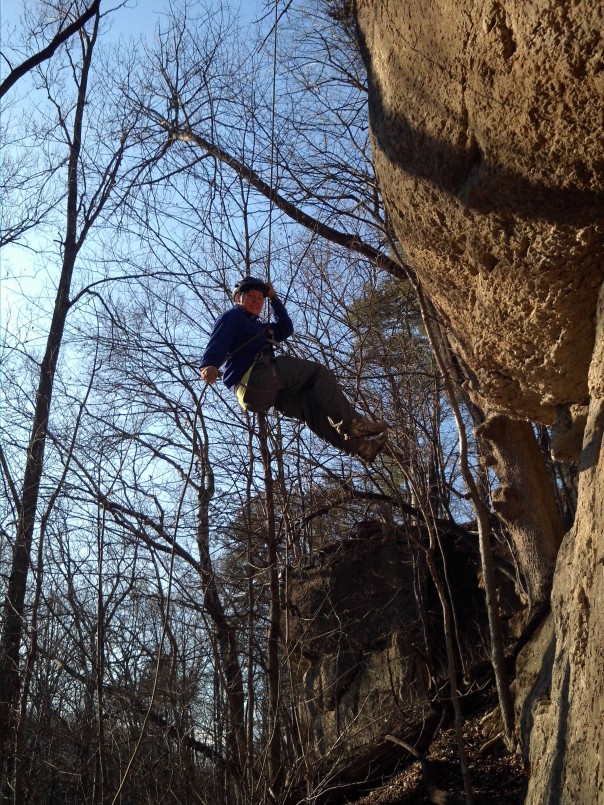 Becca on her second rappel. 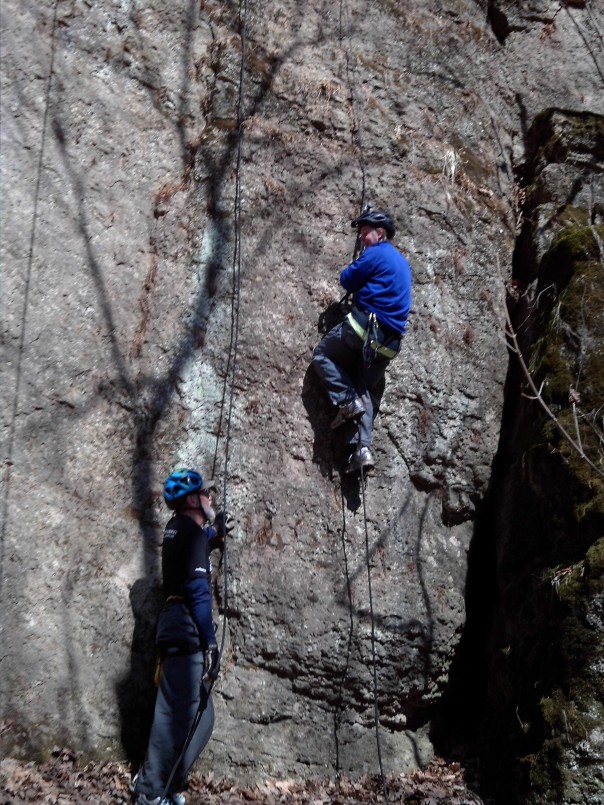 Becca struggled just a bit to get started ascending, but once she found her rhythm, she crushed it! 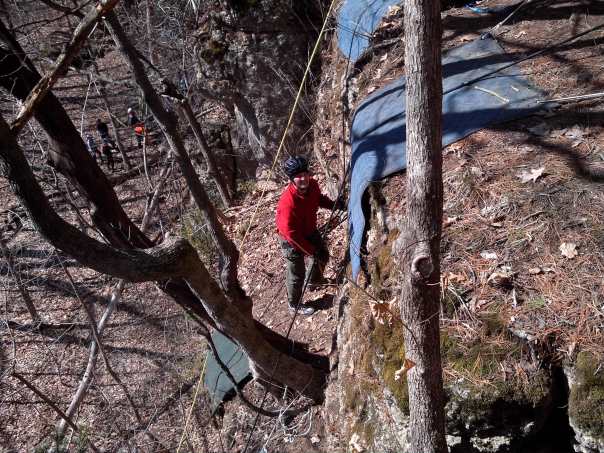 Adam is an OLD pro at ascending by now. 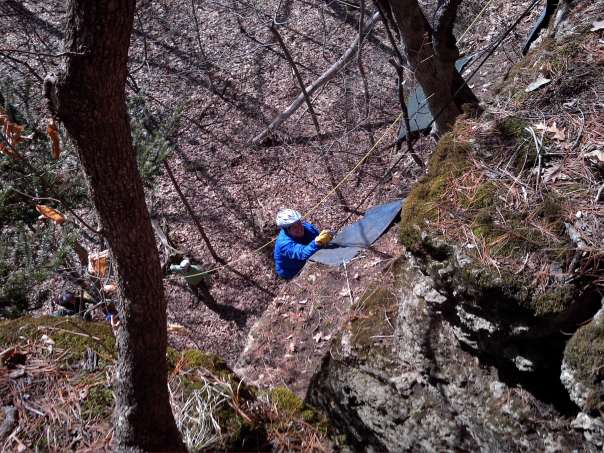 Michelle made it up too! 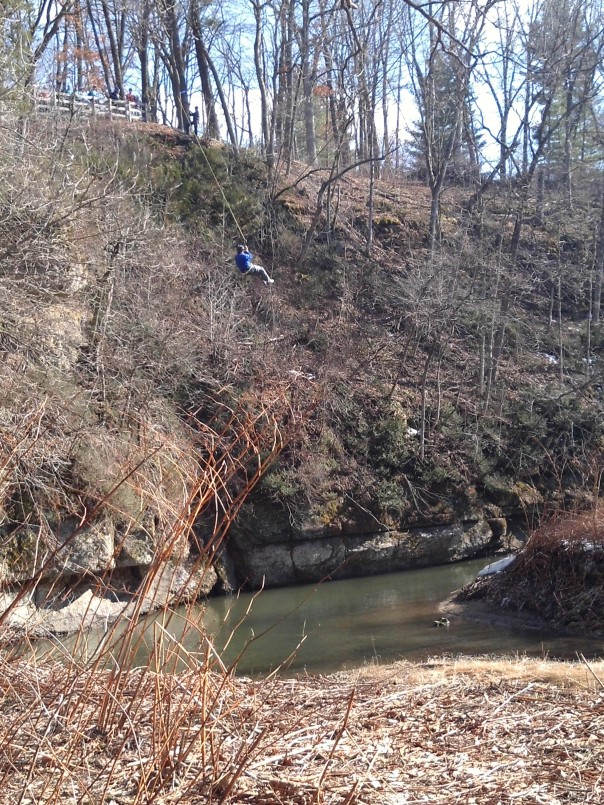 Becca coming down the Zip Line. 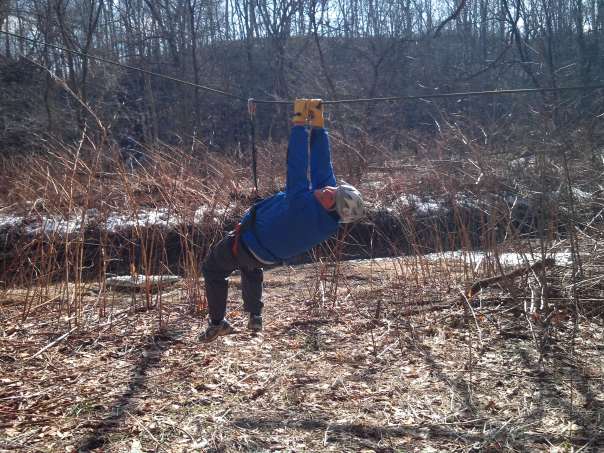 The Zip Line was a bit slow at the bottom, so you had to pull yourself down the last half or so.

Michelle opted to conserve her energy for the race in the morning, so she decided to skip the Tryolean Traverse. It’s not too bad for the first half since you’re going slightly “downhill.” But then you have to pull yourself the rest of the way, fighting gravity. It can be very tiring. 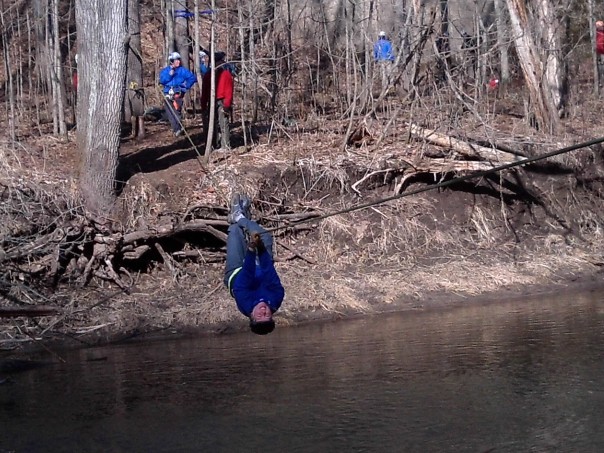 Becca at the midway point. It’s all “uphill” from there. 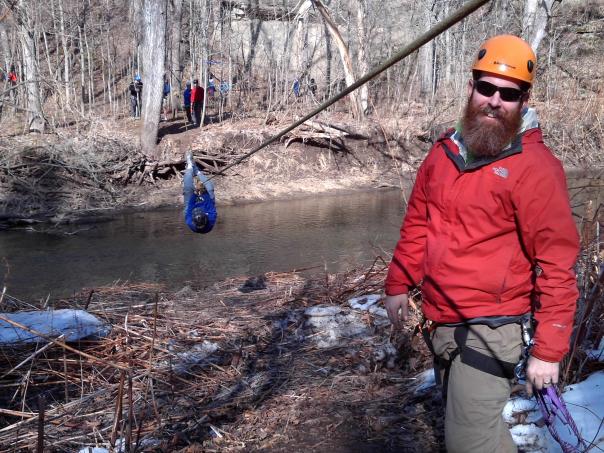 All of the volunteers at camp are top-notch. Dave even gave me a bouncy ride on my traverse, but he was kind enough to let Becca have a steady rope.

Then Gerry gave the pre-race briefing, and we got our maps. The Lightning Strikes report will come out soon – sometime within the next two years.

As you can probably tell, we had an amazingly good time the first day and a half. The High Profile Adventure Camp is hands down the best way for beginners to get started in adventure racing, and it’s also a great place where veterans of the sport can continue learning and expanding their skills.

For what you get – the top-notch instruction, the lodging, the awesome swag bag, some food, the super safe environment, the fun, the adventure, the laughs, and then a  4- or 8-hour adventure race – it is an absolute steal. You’re crazy if you don’t go at least once.

We’ll definitely be back (a fourth time for me), and hopefully we’ll have more Virtusans and spouses with us.