Hearing all the war stories from LR100 2016 really got me interested in this race.  The atmosphere, the beer, the food, the mud, the fun…  These are all phrases I heard from my Team Virtus teammates after last years race.  They convinced me that this was the race to try, so who was I to let them down?!?

I was on a deer stand hunting for the a turdypointer when registration took place.  Luckily Jim Smith was gracious enough to sign me up.  He also talked me into signing up for the fat bike division.  My first thought were hell no and I think I even asked him if he was nuts.  But after much discussion, it was decided that we would both enter into the fat bike division.  After all, we have ridden our cross bikes 100 miles many times.  Never before have we ridden that far on our fat bikes.  Adventures needed to be pursued.

My training leading up to the race was less than stellar.  A new baby at home, and 2 other very busy kids left me with little time to spend hours on my bike.  That is no excuse though, and I have finished races before with less than stellar training.  It is just a matter of will.

So race day came and I was at the start line.  I will admit that my mind was definitely not right from the get go.  I woke up and looked outside.  Rain…  Now the race director did say that some rain will do the roads some good.  So there was that.  I looked at the radar before departing for the start line and it looked “ok”.  My mind debated a lot on what to wear.  Being cold is not my forte.  In fact I hate being cold.  So I wore my winter tights, bibs, long sleeve base layer, team issued jersey, water resistant coat, shoe covers, half fingered gloves, full fingered gloves, lobster gloves, and head cover.  I was still a little chilly, but feeling ok.  I was afraid that I was overdressed, but after seeing others at the start line with more on than myself, my mind was more at ease.

Jim Smith and myself ready for action

The race rolled out on pavement and then turned to fast gravel.  I was trying to keep Jim in sight without going to hard, but soon he was out of reach.  Riders got strung out quickly and I settled into the groove. 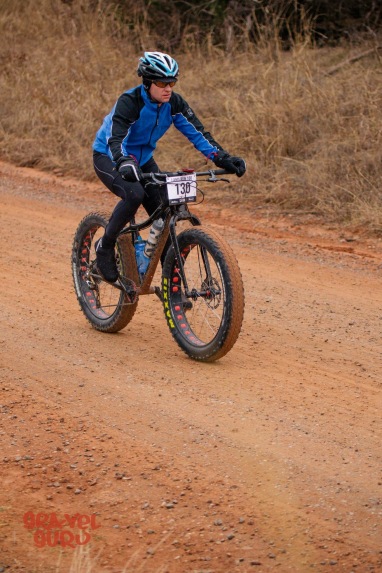 This was nice riding at this point.

Still having fun at this point

The bike was handling very nicely and I was enjoying myself until….  Yes, the mud pit.  I think this happened around mile 26 or 27.  As I looked ahead I noticed that some were walking.  But the gravel/dirt didn’t look any different.  I thought I could ride it.  That was a huge mistake.  As I peddled into the tacky mud, my bike came to a grinding halt.  No big deal I though.  I’ll just push it up this hill.  What I didn’t count on was my tires locking up because of mud buildup.  No big deal I thought.  I’ll just carry my bike up this hill.  Wrong…  My bike had turned into trot line weight and there was no way I was getting it on my shoulder.  I scrapped the wheels off the best I could with my glove.  Enough to at least hoist my bike for a bit.  But then my lower back started killing me and I had to set my bike down. Son of a B@&$H!  My second attempt ended like the first.  In pain an more cursing.  I though, “What am I going to do??!”  I can’t push my bike because mud gets stuck to everything.  I can’t carry my bike because it’s heavy and my back hurts. 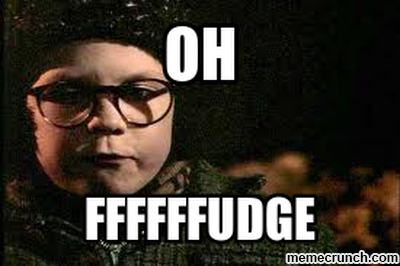 Thoughts of warnings from my team mates rang through my head and now I understood.  At my most low moment Chuck walked up behind me.  He gave me a few pointers on how to carry my bike and what was working for him.  He even carried my front tire for just a bit, but I finally told him to go on.  He lifted my spirits some and somehow I  figured out how to carry my bike for more then 10 ft. at a time and made it through the first hike-a-bike section.

Now that I was back on the bike, mud was being flung everywhere.  My glasses were completely covered and I couldn’t see.  Those had to come off and then the mud flew into my eyes.  Then it started pouring rain.    Great…  This is when my hands and feet started to hurt.  Moisture was seeping into my once dry socks and everything was getting soaked.

When I arrived at the 2nd hike-a-bike section there was a group of riders at the top of the hill.  They were all just staring at what was to come and probably contemplating death.  I rolled up to stop, only I could not clip out!  Like a complete armature, I fell right into one of them.  WTF!?!?!  I hadn’t done that in what seems like years.  I laid on the ground, embarrassed, cold, wet, and still clipped to my bike.  The rider I fell into was very gracious as I apologized all over myself.  He assured me there was no worries and even said he does that all the time.  That made me feel somewhat better, but I was still completely embarrassed.  I was very pissed after that.  I said F@#K IT and decided to ride this section of hike-a-bike.  To my surprise I could.  As long as I stayed in the really soupy sections, I was getting through.  This made me very happy.  I rolled past Chuck, who was walking and he yelled something like “Go Robby Brown!”  If I stopped I knew I was in trouble.  Thank God I was on a fat bike.  I made it all the way through this section. 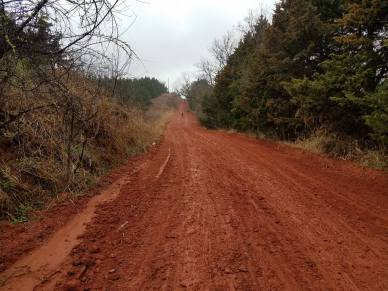 Now comes more mud flinging.  I had to stand while going downhill so I wouldn’t get all the mud in my face.  Race they said…it’ll but fun they said…  Miles ticked off and I started thinking about the 2nd half.  That’s when the 3rd hike-a-bike section hit.  Once again, I could ride the soupy sections which made me happy.  But halfway up the last climb the soup was gone and I my tired can to another halt.  S!#T!!!!  I was forced to scrape off more mud and carry my lead weight, I mean my bike.  I made it to the top and riders had found a hose.  I waited my turn and sprayed my bike off just enough to get my chain back on.

I saddled up to the slop again.  The next 15 miles or so was a blur.  I remember riding through the cattle farm which was cool.  I did see a stop, but I knew that once I stopped I might not start again, so I chose to skip it.  I found out later that they had beer there.  Damn…  There was also a really good off road section and this reminded me a lot of Cedar Cross.  There was a very fun downhill section with a hard left at the bottom.  My cross bike handled this with ease.

Gravel/dirt/mud gave way to pavement and I rolled into the half way point around 1:30.  Still time to go back out, but it wasn’t looking good.  I found Janie and Emma and Janie said “Wow, you look like shit!”  This is a word for word quote.  I was shaking uncontrollably and was having a hard time talking.  I couldn’t feel my hands or feet, so I decided to call it quits. 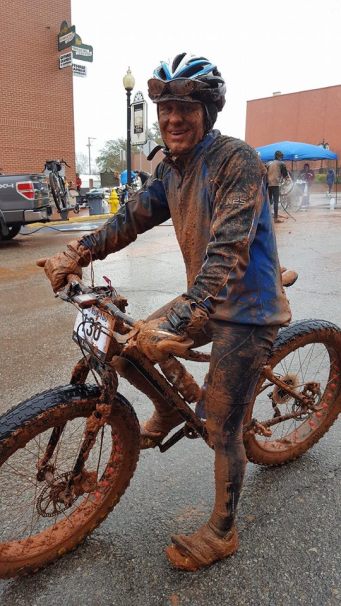 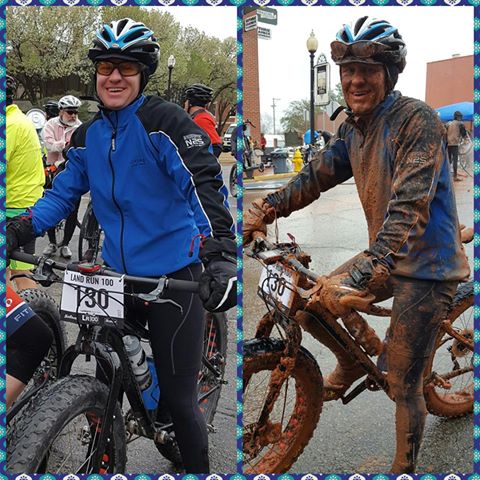 Before and after 52 miles

Janie and Emma helped me get my helmet, gloves, and jacket off and I headed to the heated bathroom to get semi cleaned up.  After changing and spraying off the bike enough to get it back on the rack we headed back to the start/finish line.  Janie was gracious enough to help out and drop off a rider who was in a very bad place.  He was cold and wet and in major need of assistance.  Janie is a great person!

The shower never felt so good!  I feel sorry for whoever had to clean our hotel because there was red dirt and mud everywhere.  After the shower and a dip in the hot tub we headed back to the finish line to cheer on those who were crazy enough to finish and also cheer on and congratulate our teammate finishers.  Congratulations to both Jim and Kate on their finishes.  Amazing is all I can say.

Jim Smith (AKA BLUE) is an animal!  You’re my boy blue! 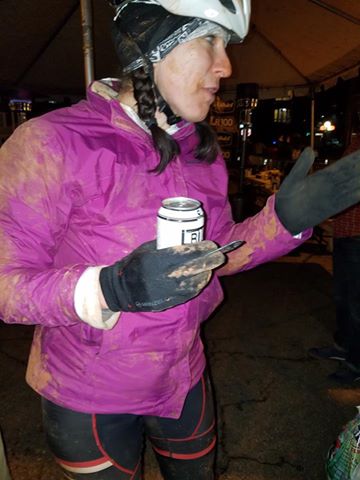 Nothing could stop Kate from finishing.  Not even brakes.

This race is definitely it’s own animal.  After finishing DK200 twice I thought this was going to be a walk in the park.  Boy how wrong I was.  Will I return next year?  I don’t have that answer yet.  I would like to say yes, but I might be on a different bike.  This was by far the hardest 52 miles I have every done on my bike.  I really underestimated the hike-a-bike sections and my mind/heart was not really into it from the get go. I have to do a lot of soul searching before I am a 100% for this grueling event.