Hopefully by now, you know we’re putting together the most badass Monstercross ride/race of all time.  This sort of thing takes a lot of time to coordinate, and a whole lot more elbow grease to make sure the course is ready on raceday. In addition to gravel roads and National Forest land, The Cedar Cross will traverse several miles of what I have come to call “forgotten” singletrack. This trail system, for whatever reason, seems to have been completely forgotten, which is both sad and exciting. Sad because so few people know these trails exist, and exciting because SO FEW PEOPLE know these trails exist!!

Today, Pepper and I set out to clear one small section of the race course. Here’s what went down.

On South Mill site road, there’s a trailhead just to the side of the road right before it becomes someone’s driveway. I suspect this piece of trail is forgotten because it’s fairly remote and just a bit hidden. This photo was taken while standing on the trail looking out at the road.

Trailhead, my ass. Keep a watchful eye for the grey diamond on the tree.

From here, it’s a short downhill to yet another hidden trailhead. I’m not kidding, it took me 30 minutes to find it the first time I was out here. The trail goes almost straight down into a semi-dry creekbed. 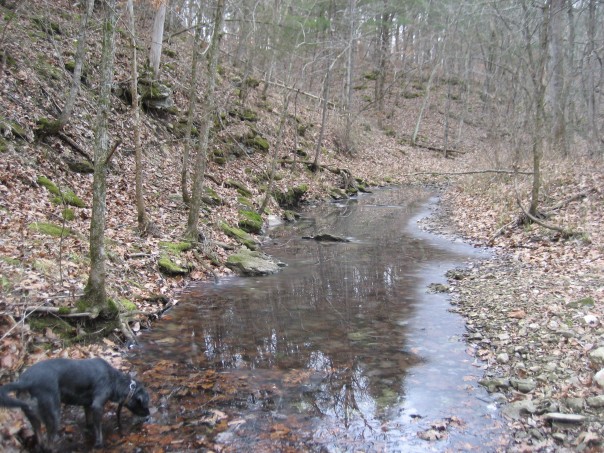 Where I'm standing, it's dry.

This is where the work started. Can you find the trail in this picture?

It's frickin' shameful, isn't it?

A  bit of heavy lifting and one broken rake later:

Pepper is such a camera whore

This is what I came up with for the water crossing. The water should pass under these rocks and roll off the trail. I’m still a beginner at this type of thing, so if anyone has a few pointers, I’m ready to learn a better way. 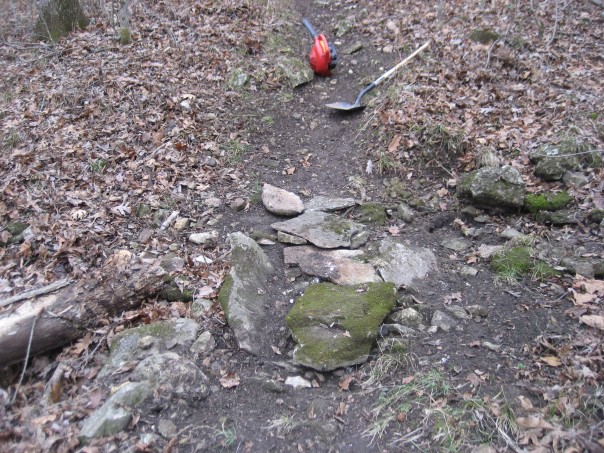 All flat-rock, water would be coming right-to-left

I bet it took over an hour to clear a piece of trail that people  will ride in about 30 seconds, but it’ll be worth it on raceday.

After clearing “Pepper Hill”, I turned my attention Northward. Check out this Before/After shot:

The dog doesn't even know where the trail is..

Well how about that 🙂

Obviously there’s still a lot of work to be done, but this course is  going to be worth it. There will be no admission fees, but there WILL be prizes for top finishers, manned SAG stops, bbq at the finish and a special SHAT trophy for the one racer who truly earns it. I’m still trying to nail down the race-date, but it I’m hoping to make it happen on March 25th

This race will be awesome.

As I sit here at work wishing I was ANYWHERE else in the world, I look back on our non-race photos and think of the lessons we’ve learned.

And as if that wasn’t fascinating enough:

Argyle socks allow you to levitate across water!!

And let’s not forget: 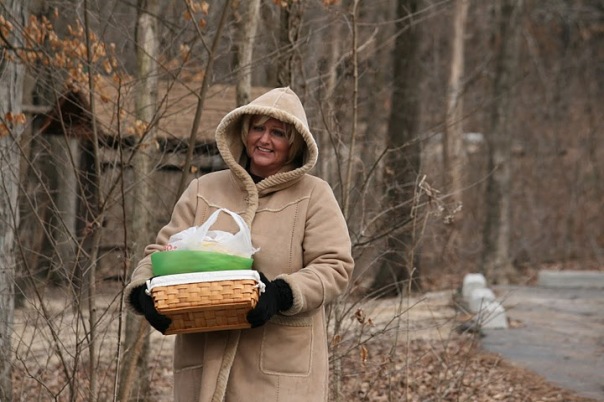 My mom likes to bring us food

Preparations will soon begin for Non-Race #3. Race details are in an extremely preliminary state, and that’s why we’d like to offer you the opportunity to contribute. Take the poll below and let us know what kind of FREE race would you like to do.

All input and ideas are welcome, just keep one thing in mind: No matter what type of event we put together, you WILL be tested. These non-races have a rich history of crushing bodies, testing marriages and getting your clothes very, very stinky. If you vote for the eating contest, you better bring your A-game and a barf bag. There will be schwag of some kind, beer and baked potatoes at the finish, and we’ll get as many photos of you as possible. All you have to do is show up and not be a douchebag.

Thank you to everyone that submitted their captions for our contest.  They were all pretty damn funny.  Drew submitted several captions, and they were all hilarious.  However, as a member of Team Virtus, Drew was not eligible to win anything.  He knew this ahead of time, but he wanted to be a smart-ass and post his comments anyway.

So now… For the moment you’ve all been waiting for… The winner is… Actually, we couldn’t decide one just on winner.  So, we picked two.  The TWO winners are…

Susy and Brandon!!!  Congrats guys.  I’ll be emailing you your gift cards for e-Gel and/or e-Fuel shortly.  What were the winning captions, you ask?  Here you go:

This was Susy’s caption.  It’s short, simple, hilarious, and it ties in with Adventure Racing nicely.  Well done, Susy!  The next winning caption goes a little something like this:

If you’ve done more than one adventure race, then you’ve probably been lost at one time or another… Or many, many times.  Brandon’s caption drives that point home.  And it also shows how you can multi-task while racing.  If you have to stop to check the map, you might as well take care of some bidness.  Right?  Good job, Brandon.

So there you have it.  Again, thanks to everyone that submitted entries.  We’ll try to do some more contests in the future.  And be sure to check out e-Gel and e-Fuel.  We love this stuff, and it blows everything else away.

Also, we’ll be posting a couple more write-ups from our adventure camp soon. We just have to edit them a little and add some photos, so be sure to check back in with us for that.

Enter Our Contest and Win Some Free Energy Gel!

Okay… This past weekend was ridiculously amazing!  Seriously, it was unbelievable.  It was so amazing, in fact, that it’s going to take us a little while to sort it all out into blog posts.  So to tide you over, we’ve decided to put on a contest for you guys.

All you have to do is come up with the best/funniest caption for this photo from The Lightning Strikes Adventure Race:

Just submit your best idea in the comments section below this post, and we’ll pick what we think is the best one.

What will you win?  The best caption will win a $20 e-Gift Card for some e-Gel and/or e-Fuel (our go-to choice for energy gels, drinks, and electrolyte replacement).  We think this stuff blows everything else away, including GU, Hammer Gel, and anything else we’ve tried.  Don’t believe us?  Check out the comparisons right here.

So, you’ve got nothing to lose and only the best gel in the business to gain.  So go ahead and submit a caption.  You know you want to.  And be sure to check back in with us to get the full scoop on our experiences at the High Profile Adventure Camp and Lightning Strikes AR.