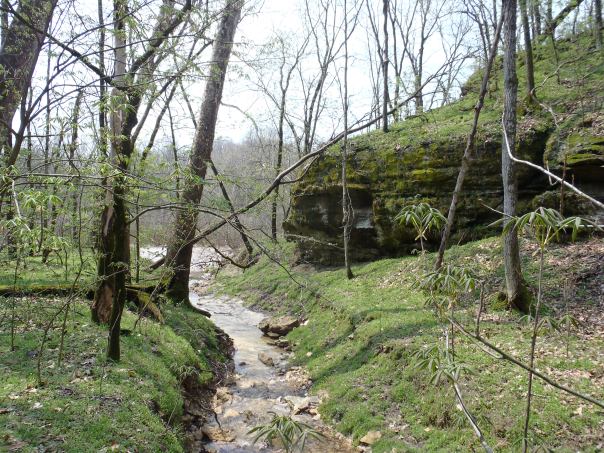 Tearing down a non-race course is a lot like picking up all the wrapping paper after Christmas morning. It’s depressing to know  you’re gonna have to wait a year before you get to do it again. This year, though, has been very different. One might even go so far as to say it’s been awesome.

A few days ago, I loaded up my pack and set out to tear down the Western half of the CAC2 Orienteering course. The following is my account of this truly badass day.

9 am: Woke up and checked to see if anyone I had invited was going to show up. No dice; this would be a solo venture.

10 am: Driving down Highway J, I see a bald eagle swoop down and pick up some roadkill. I nearly wrecked my truck watching it happen. This was surely a sign that today was going to be awesome.

12:05 pm: Parked the truck at the end of County Rd 354, hit the woods and started hiking North. I could already hear the water ripping down Cedar Creek. Before long, I was crossing a small feeder creek and started finding beaver chews. I love finding this kind of stuff.

Not the best photo, but you get the point

About 20 minutes later, I arrive where the CP flag should be.. and it isn’t there. With CP flags being $9 a piece, this was disappointing, for sure. I decided to sit on the cliff and look around. Sure enough, I spotted the flag about 100 feet downhill from where it was originally placed. 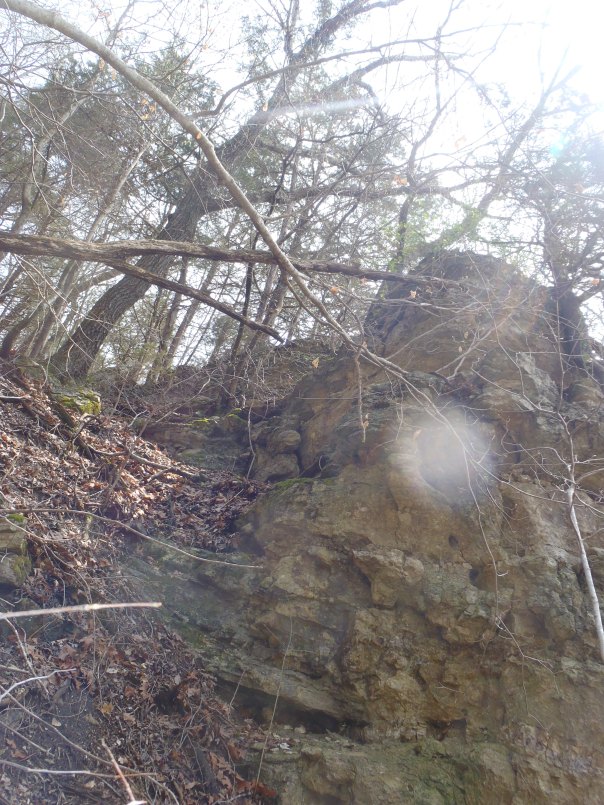 This was the view from down under the cliff. Getting back to the top was a bitch.

After gathering the next two flags, I decided to slide down the hill and follow the creek Northward for a bit. I started noticing a bunch of Blue Heron cranes flying around, and when I stopped to watch them I realized I was in the middle of their nesting grounds. Blue Herons are known to make their nests in large Sycamore trees,  so I sat under one and watched them fly in and out of their nests. It was very cool to watch these giant birds swooping around. They make the oddest sounds..

Again, not the best photo. You really had to be there. I counted 15 nests and at least as many birds.

This was now uncharted territory along Cedar Creek, and since I’d forgotten to bring my map I wasn’t sure if I was still on public ground. The houses on the bluffs above would make me an easy target for someone wanting to shoot a tresspasser so I made my way into the wooded area away from the creek. Ascending the bluff, I found yet another clifftop with the most scenic view I’ve found to date. Check this photo out:

There’s just something awesome about looking down onto the treetops

Getting to the top of that cliff was tricky; it’s overgrown with cedars and some kind of vines. But once I got there, I found a pretty cool slab of rock right at the edge where a person could sit and take in the view. Dangerous for sure, but a pretty awesome feeling to be that close to the edge. 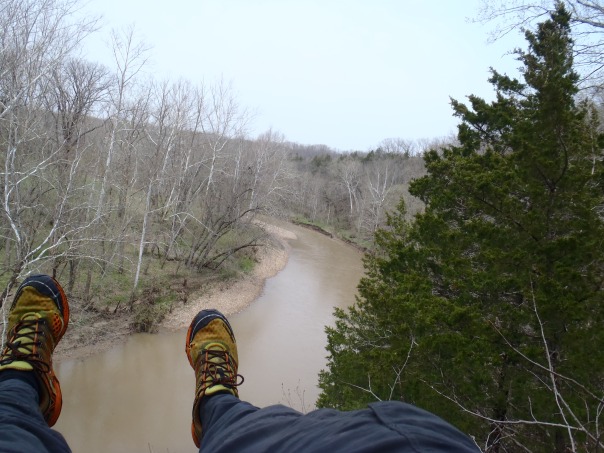 looking back now, this was a pretty irresponsible thing to do…

The photo doesn’t do a good job of showing the steepness of the hill going down to the waterfall. I can assure you that it was at least mildly perilous. This is definitely one of my new favorite places.

when did my beard get so grey??

This trip was just getting better and better. My plan had been to hike North along the creek until the second time it turned Northeast, then packraft my way back to the truck. I was almost sad when the creek turned, but I was super excited to get in the water. Making my way toward the water, I found this rock formation with a giant gorge in either side.

You could rappel down the middle, but I came down from the left.

The terrain was too tricky to get a photo at the top, but I did snap this one from the bottom. If you look where I’m pointing, you’ll see two small caves at the base of the rock. I assume they connect in the middle, but we’ll have to verify that on an exploration trip very soon..

Two little caves at its base, but I was too tired to climb back up there and check em out. 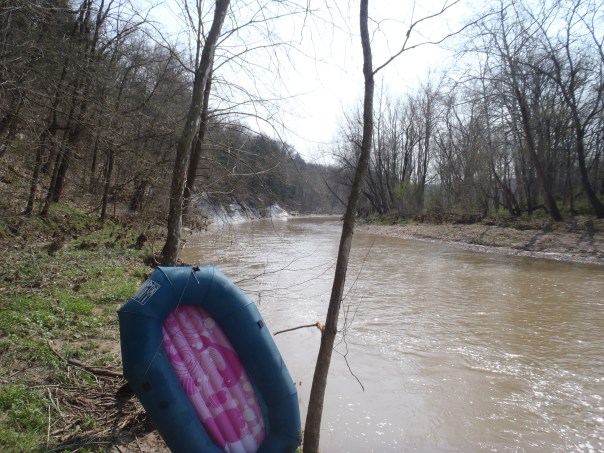 I found a nice calm pool where the water wasn’t moving too quickly and shoved off. At  first, the water was relatively calm…almost relaxing. In several places, like the one pictured below, there are small trickles of water feeding the creek.

Still pretty dry at this point

90% of the time, this creek is mostly dry. I’ve only ever seen it floatable after sustained heavy rains and/or flooding. And since the water level is never really constant, you just never know what the conditions will be like. Up until this point, there were very few strainers and only a small rapid or two.

Still pretty calm waters, but there was a heap of excitement around one of these corners.

The boat was doing well, my drybag was still floating and I had somehow managed to not drop my camera in the creek. I had no idea what time of day it was anymore, and that’s how I know I’m having a good day. 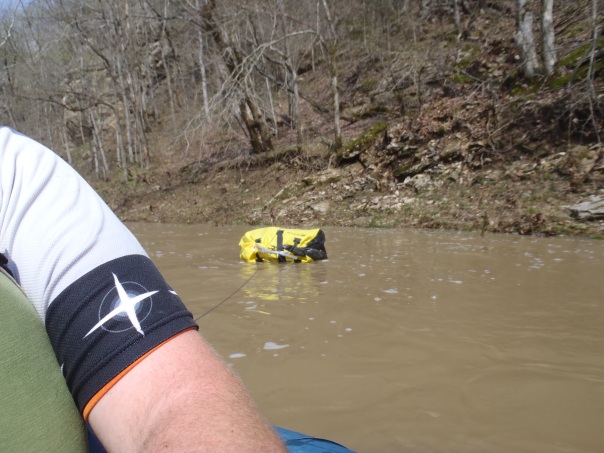 My floating trailer idea seemed to be working..

Little did I know the “drybag” was filling with water and all of my fresh clothes for after the float would be soaked. Coming around a bend in the creek, I could hear the rapids ahead and saw that I had to make a decision.

After that, things started happening a lot faster. A few quick rapids later I found myself dodging this little strainer.

I realize the video quality isnt the best, but you have to understand I was holding the camera in my mouth. By now I was full of confidence and ready for the next volley of rapids. This next video shows you why I bought  a packraft in the first place. I’m sure these rapids would be no big deal in a whitewater kayak or maybe even a canoe, but in a small inflatable boat….excitement abounds.

I’m sure you could hear a *little bit* of fear in my voice on that one, but I assure you.. the fear was totally eclipsed by the excitement of that moment. Moments like those are the ones  that make all your cares disappear. Your entire world is right there in the boat, there are no wandering thoughts of bills, careers or anything. All you think about is the spray in your face, the paddle in your hands and the ice cold water marinating your testicles….and I suppose you think about the friends you wish were there to share the experience.

Posted in Adam masturbates, Bob had to go solo, flytepacker