Virgin Snow for a Virgin Ride

In case you haven’t heard, I got a new bike.  With all of the crappy weather, I had only taken her out for a 10 mile road ride.  When the pre-planned gravel road ride for Sunday was canceled, it opened up a perfect opportunity to really test out my new bike.  Zack, Bob, and I decided to head down to Council Bluff. We chose Council Bluff because it holds up much better in wet and snowy conditions than any of the trails around here – and it also just happens to be one of the most beautiful and most fun rides in the state. 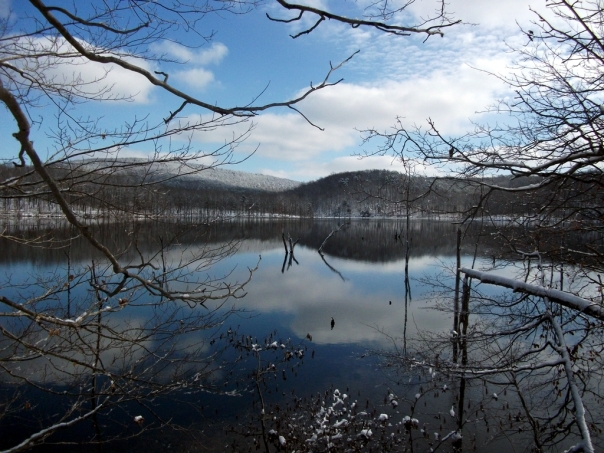 We decided were were going to do two laps since the trail is “only” around 12 miles, and we wanted to get some endurance training in.  After getting only a little bit of sleep (I was too excited to be riding my new bike for the first time), we left my house a little after 6:00 AM, and we got to the Lake around 8:45 or so.  We thought there would be less snow than what we had in Jefferson City, but we were mistaken.  In some spots the snow was 6 inches deep, in others only an inch or two.

The weather was great, the snow was beautiful, and the ride was spectacular. Here are some photos to give you a taste of what you missed out on: 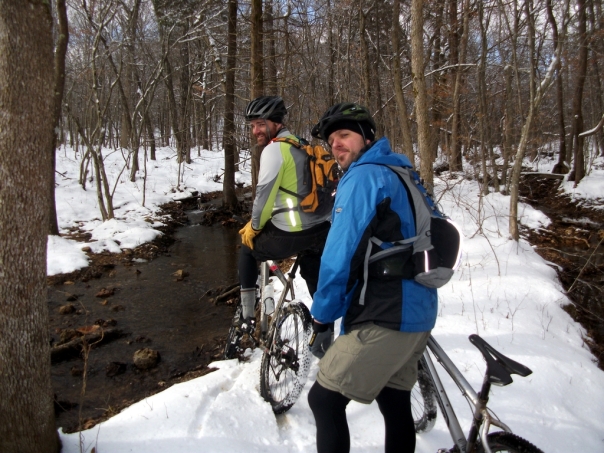 One of the many creek crossings

Cheesy posing by the lake with my new bike

Mountain biking in the snow is always fun, and snow riding is a great way to improve your bike handling skills.  Plus, you’re almost guaranteed to have the trails to yourself.  However, the snow makes things much more difficult.   A mild, gradual climb like the one below becomes a tortuous mountain of pain when you have to grind your way up through the snow. 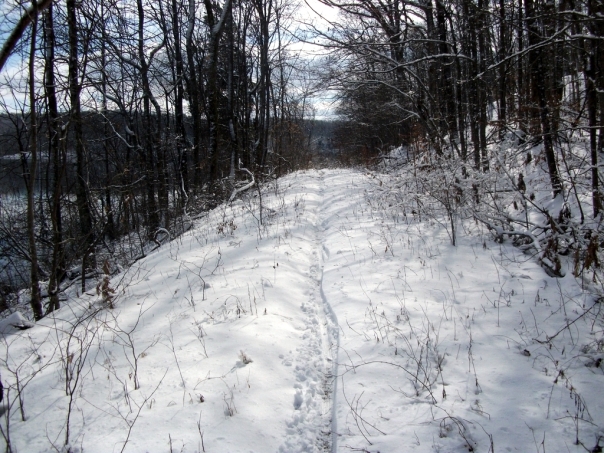 Gradual climb in the snow

Bob trying to climb the fire road in the snow

Of course, it wouldn’t be a true mountain bike ride if Bob didn’t get a flat.  There are only a handful of rides that I’ve done with Bob where he hasn’t gotten at least one flat.

We've all seen this before

We all got our feet wet at one point or another.  Zack slipped off a rock while trying to walk across a creek.  I got my feet wet when I thought I could ride through a creek only to find my front tire sink into to the muddy, mucky cesspool in front of the creek (it smelled like Bob’s dukey at the trailhead).  Bob, however, has Zack to thank for his wet feet.  As Bob started to cross a creek, Zack gave him a nice, friendly push on the back.  I’m sure Bob appreciated this.

We also all crashed several times:

Look closely and you'll see Bob on his back

There were several bridges over the larger creeks, but the snow made them tricky to ride.  All but one of the bridges had railings, though, so they were fairly safe to cross.  The one bridge without a railing crossed a creek that was at least 4 feet deep.  There was also huge hole in the middle of the bridge.  This particular bridge was in the middle of nowhere, so if we had fallen in, we could have been in trouble.  So, we erred on the side of caution and walked our bikes across.  That is until Zack offered to buy Bob a beer if he tried to ride it.

Once again, the video doesn’t do this bridge justice.  It’s A LOT more sketchy when you’re actually there.  There was no way I was going to ride that thing.

I have to say, I love my bike even more now that I’ve actually gotten her out for some trail riding.  The big wheels and the Reba shock make a world of difference.  I could barely feel any of the rocks and logs, and I felt like I could roll over anything and everything.  There is a fairly nasty rock garden at council bluff (at least it’s nasty to me).  I’ve never even attempted to ride this thing before.  I always chickened out and walked my bike over this section.  On this day, though, I had all the confidence in the world with my new Stumpy 29er.  The snow couldn’t even scare me away.

I actually came to a complete stop at the beginning of this stretch, but I somehow managed to keep my balance and then continue pedaling.  I felt like I was nailing this thing.  I was rolling over and in between all of the rocks with ease.  I looked like a pro (okay, it was probably pretty ugly, but in my head it was a beautiful thing).  I made it probably 90% of the way through when my front tire got wedged between two large rocks.  I went down.  I managed to land in the soft snow, but my new bike wasn’t so lucky.  The frame landed right on the biggest rock, and it chipped the paint on the frame pretty good.  I hated to see that, but at least I earned the chip, right?  And now I don’t have to worry about babying the new bike anymore (not that I was anyway).

As we kept riding, I was getting tired out.  Every little hill seemed huge.  Zack seemed to still be feeling strong as he powered up most of the hills while I walked.  It seemed like this trail was twice as long as it really was.  We kept looking for the damn dam, but it seemed like we would never get there.  We kept thinking it was right around the corner – Wrong.  We eventually made it, and we knew we didn’t have much farther to go.

My Stumpjumper 29 on the dam at Council Bluff 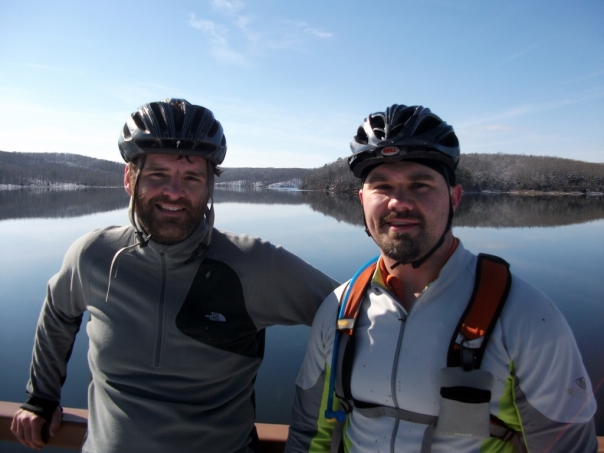 We all agreed that we were not going to do two laps.  It was taking more than twice as long as we had anticipated, and the snow was absolutely killing us.  We left the dam and rode the last couple of miles back to the parking lot.

Parts of the trail were completely thawed, and it was gloriously good riding.  Even the snow covered trail was a lot of fun, and it was great practice.  We all had a great time, but we were all glad to be done.  We headed back to Jeff City, and we stopped in Cuba, MO at Missouri Hick Barbeque.  Bob and I destroyed the All-You-Can-Eat-Rib-Special, while Zack chose a more reasonable meal.  I waddled out to the truck, and we headed back home after a great day of riding.