Ridin’ for the Cup #1 – The Cock Gobbler Ride

I’ve regretted coming up 6 or 7 miles short of a metric century at the Rocheport Roubaix a few weeks ago. The race was 55 miles, but the weather was bitterly cold – like in the teens with high winds kind of cold. My feet were frozen, and I was exhausted at the end of that race, and the warm cafe was too inviting, so I didn’t go out and ride the extra mileage to get credit toward earning my Cup O’ Dirt.

So, I really wanted to ride a metric century (62 miles for those of you who don’t want to Google how far a kilometer is) as soon as the weather turned halfway decent. But we weren’t just blessed with halfway decent weather last weekend. The weather was simply superb for early March.

Travis, Bob, and Jim joined me in Mokane to do the Cock Gobbler Ride. – 53 miles so we were planning on adding some Katy Trail miles to the end of the ride to hit 62 miles total. We met at the Katy Trail parking lot and took an obligatory pre-ride photo. 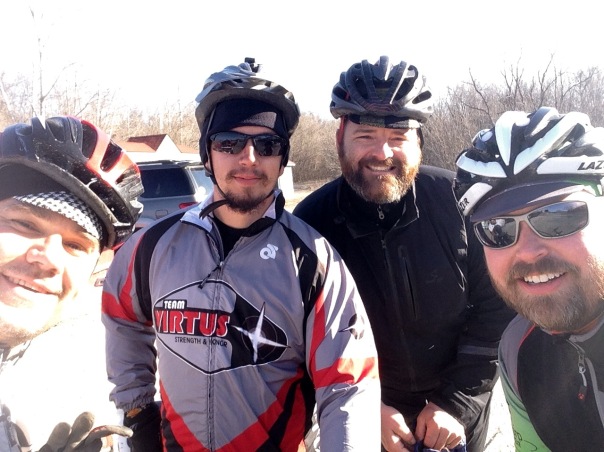 It was sunny but cool at the start of our ride. The first climb had us plenty warmed up. The gravel was super smooth and hardpacked, and the wind was at our backs. It just couldn’t get any better.

We soon found ourselves close enough to the local Casey’s General Store, so we obviously stopped for some delicous breakfast pizza, Spike Energy Shots, and other beverages and snacks. I may or may not have spilled Travis’s Monster drink, and I may or may not have sucked the spilled beverage off the sidewalk. No photos were taken, so you’ll have to decide for yourself.

Where was everyone else on this gorgeous day? We may never know.

We rolled out of the Casey’s parking lot onto the pavement for a short stretch before we got back onto the gravel. There were some good climbs, lots of laughs, a few deep conversations, and several pee breaks. See for yourself…

Jim at the top of the first big climb.

Travis, quit playing with your dinghy!

Shortly after this pee break, we found the remnants of an unlucky victim of last year’s Cedar Cross. We stopped for a moment of silence (and to take photos of course).

This poor rider. At least he died riding The Cedar Cross.

One other, uh… “highlight” of the ride was seeing a beautiful creek from a rural bridge. The breathtaking view brought us an immense feeling of peace and serenity. All felt right in the world until  Jim said, “What the hell is that?!” We all turned to look, and we saw this:

What is that? Hmm…

At first we thought it was just some trash, maybe some old house insulation thrown over the bridge. But that wasn’t it. It took us a minute to realize what it was. Here’s a closer photo for you. See if you can tell what it is.

Once you can tell what it is, it’s pretty gross. You can click on the image to enlarge it if you’re into that kind of thing.

Look closely and you can see a tail, an ear, and at least two snouts of pigs along with intestines and other various organs, skin, and what not. Nasty. And this is a good reminder of why we should ALWAYS treat any water out of a creek, river, pond, or lake before drinking it.

After that, we were of course hungry, so it was great to find ourselves at the Hams Prairie Store, home of the world’s best hard salami sammiches. Or so I’ve been told. I have yet to experience the deliciousness, and since I had forgotten to bring any money, this ride would be no different. But Bob bought himself a sammich and shared it with me, and it truly was delicious. For those of you riding The Cedar Cross, make sure you get there early enough so they don’t run out of salami like they did when I first rode Cedar Cross! 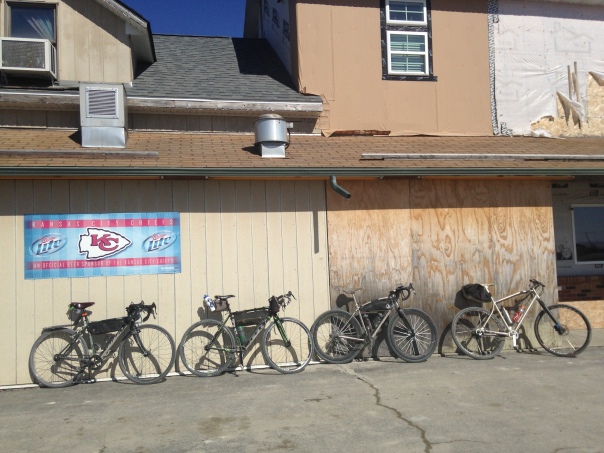 The only place in town.

Before long, we made it to the nuclear power plan near Fulton. Again, those of you who are riding Cedar Cross should be sure to stop for a photo here.

This is one of the highlights of the ride.

Sadly, Adam and Robby couldn’t join us even though they both wanted too. Adam had to work, which is only a marginally acceptable excuse. Robby had hernia surgery the day before, so that’s a little more understandable. The first thing Robby said as he awoke after surgery was, “Ask the doctor if I can ride tomorrow.” And that, ladies and gents, is why he is the mutha-effin’ Darkness!

Sadly, we couldn’t find “The Darkness Road” so this will have to do.

For those of you who haven’t had the pleasure and sheer joy of riding with Bob Jenkins, he often does some cool shit on a bike. Most of it scares the hell out of me, and I’m too chicken to even attempt it. He can stand up on his bike while hauling ass down a bumpy gravel road with his arms out wide à la Jack Dawson doing his King of the World bit in “Titanic.” Not that I watched that chick flick. And I definitely didn’t cry when I didn’t watch it.

Here is a series of photos of Bob “Jack Dawson” Jenkins working his magic. And yes, this is on pavement, but I assure you I have seen him do this flying downhill on gravel roads. And if you’re reading this, Mama Jenkins, I’m totally kidding. Bob would never do such a thing.

Toward the end of the ride, we were supposed to ride the Katy Trail for several miles. That wasn’t gonna happen. With the snowmelt from earlier in the week, the Katy Trail was way too soft. It was like riding through two inches of peanut butter, and I say that from experience.

So we altered the route, adding more gravel with stupid headwinds. The last few miles hurt, but we made it the full 62 miles. My first metric century of the year! Woo hoo!

Jim and Travis had other obligations, but Bob and I grabbed some beer and wings and headed over to The Darkness residence to surprise Robby.

The Darkness will be back on the bike soon, bitch!

It was great to see Robby after the ride. He was moving a little gingerly, but he’s one tough SOB. Every once in awhile, he’d just punch himself in the stomach to show us how many he is. Very impressive.

Sights were seen, farts were ripped, and many miles were ridden. And one century toward my Cup O’ Dirt is in the books.