A while back, Adam and I decided we were man enough to ride the Katy to Augusta. Mother Nature thwarted our plans with lightning and hail, forcing us to cut the ride 20 miles short, ending at Treloar. It was a hard-fought 60 miles of soggy trail  to that  promise-land of cheeseburgers and beer, but definitely worth the effort. Upon our return to the capital city, plans were immediately set into motion for a repeat performance on May 21st… Yes, on the day of the Rapture.

The weather forecast for “Augusta, v2.0”  was pretty grim. Rain was predicted for the entirety of the day, growing into severe thunderstorms as evening came. When we met at the commuter lot, I think we were all a bit surprised to see partly cloudy skies and a dry Katy Trail. 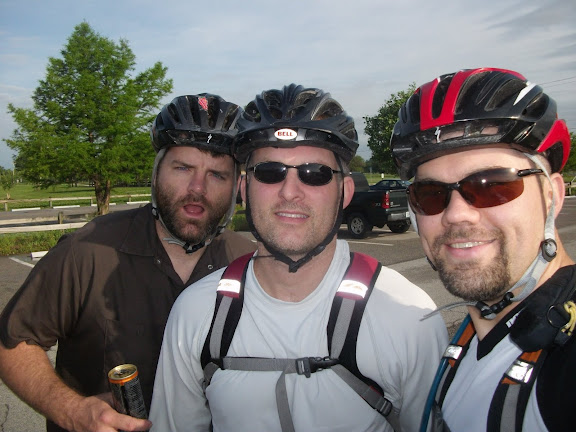 See how stupid you look when you don't have cool sunglasses?

Excitement was in the air.  Luke and I got our bikes and gear ready while Adam took the opportunity to apply some anti-chafing creme. I don’t know why he puts it on while running, but I still managed to get a photo: 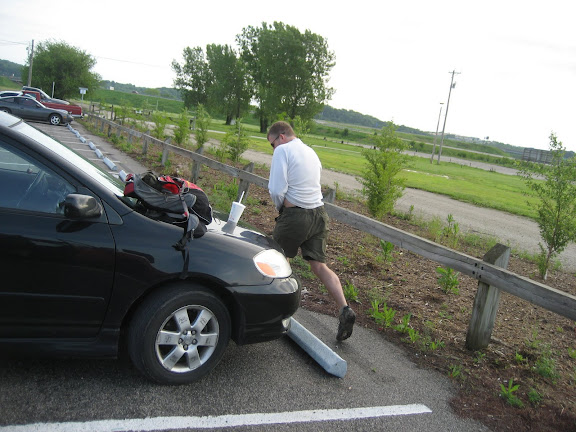 Everyone had installed fenders for this ride since the trail was supposed to be wet. Adam and I both had these on the back, while Luke had bought this kit.  Luke was pretty proud of his fancy fenders, but never got to see how well the rear one worked. Apparently it blew off the bike going down the highway. I guess we can mark that one off the next list of “Gear We Reccomend“. At least he had a front fender…for now.

Now that everyone was ready to go, we pointed our steeds Eastward and started groovin’. 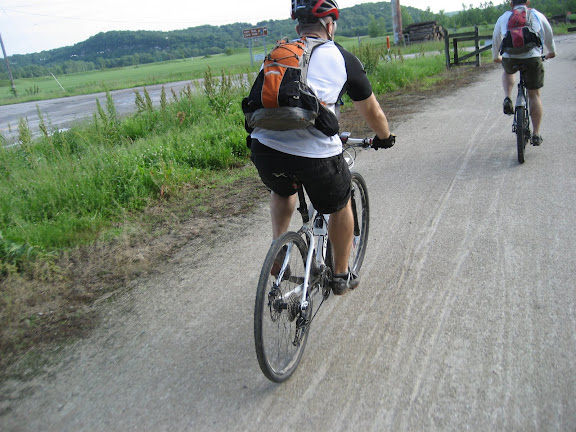 This was Luke’s first time heading East on the MKT, so we stopped for a minute in Tebbetts to give him a grand tour of the $5 per night shelter. When you walk inside you’ll see this: 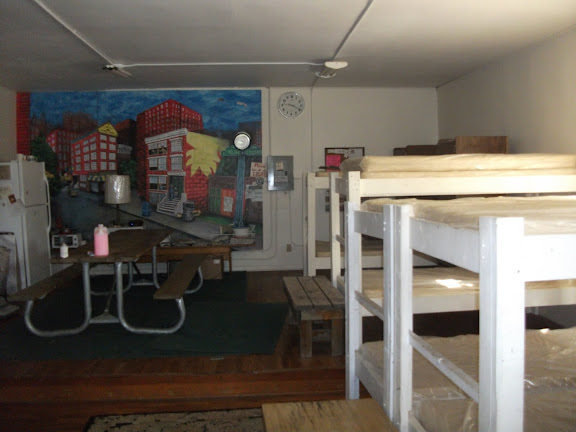 Plenty of room to sleep in here, too. 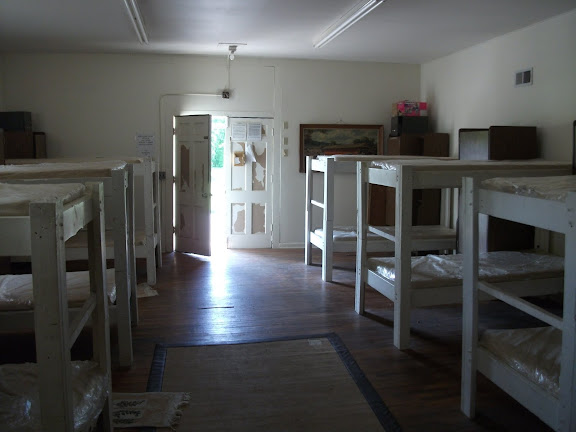 Need to work on your bike? No problem. 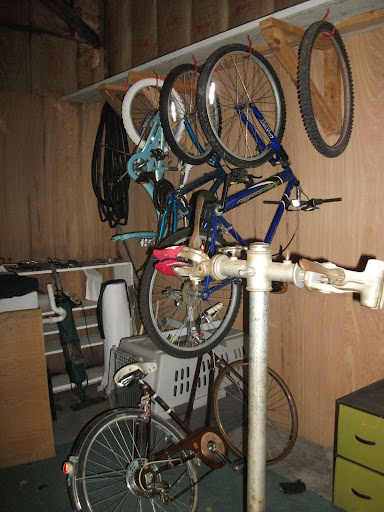 And perhaps the most smile-inducing part of this whole building…A clean bathroom complete with toilet, shower, soap and paper towels. 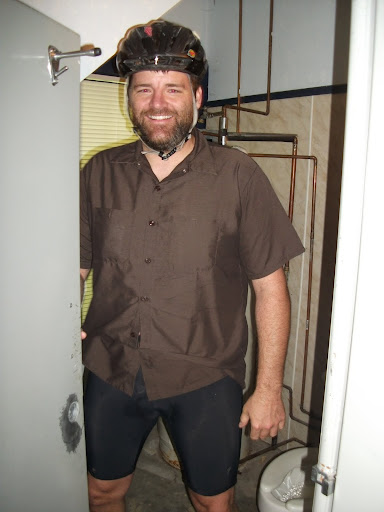 I'm Bob Jenkins, and I approve this bathroom. And yes, I was wearing a helmet while on the toilet.

After the tour, there was no time to dally. There were roast beef sandwiches waiting in Mokane, and we needed to get there as soon as possible. 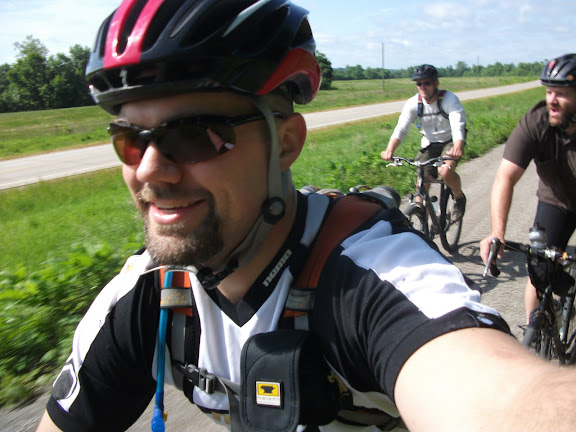 The Katy Trail was really dry, so we were holding a much quicker pace than last time. In fact, we were going so much faster that Luke and Adam weren’t even hungry when we got to Mokane. I guess it was because they had gone to McDonald’s that morning without me, but I’m not bitter.  Fuckers. 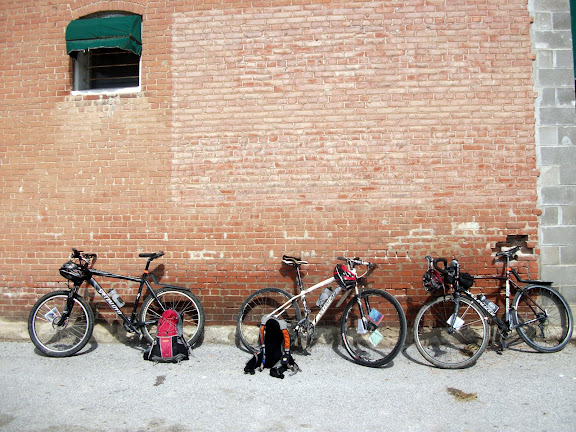 Nearly every brick on that wall has someone's name scratched on it. Purty cool, if you ask me.

There’s just something about these sandwiches that makes me all warm and tingly inside. There isn’t anything fancy about them, but DAMN are they good. Pair ’em up with a bag of Sun-chips and a Black Cherry soda and you’ve got yourself a little thing I like to call the American dream. I mean… my American dream, anyway. 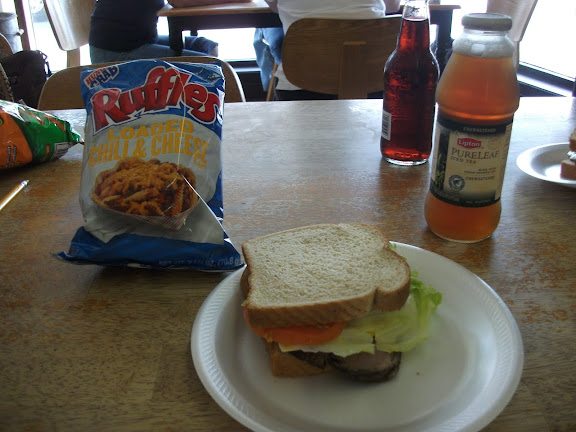 That's what I'm talking about

On our way out of Mokane, we noticed that someone had actually ridden their lawn mower into town to buy groceries. With stars in his eyes and a dab of urine in his pants, Adam jumped aboard and lived out an American dream of his own.

Heading further East, I noticed some cars hidden in the trees. I pointed them out to the other guys and inadvertently set off an unfortunate chain of events. Luke ran into my back wheel and wrecked… I offered my support by taking this photo. 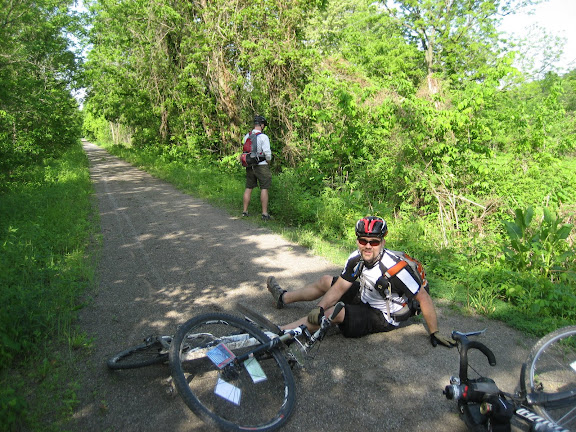 I’m not sure why Adam is tea-bagging the poison ivy in that photo,  but I guess we all have our bad habits. After we determined who was to blame for the wreck, (me),  we managed to get back on the trail before the mosquitos got too thick. 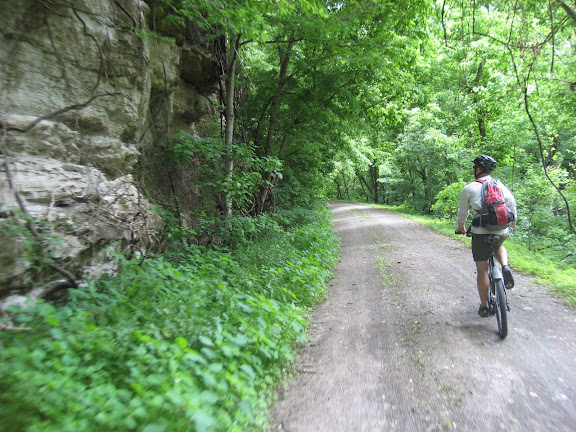 Despite such a nasty weather forecast, there had still been zero rain. We decided to capitalize on the dry trail and pick up the pace. We also needed a good shot of Luke’s tricep and Adam’s calf…you’re welcome. 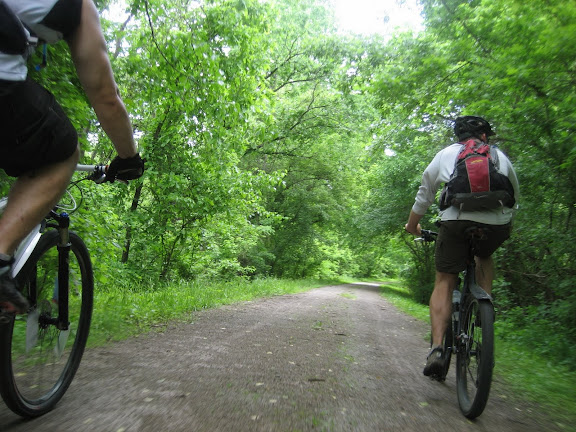 I could hardly believe my eyes when we rolled up at the “Big-Ass Rock.” The miles were literally flying by; this had to be double the pace  Adam and I had ridden when the trail was wet. This was getting a bit ridiculous, and by ridiculous…I mean awesome.

With the Big Ass Rock growing ever-smaller behind us, our sights were now set firmly on the town of Hermann, a place where the beer flows like wine. (Free Honey Stinger waffle to the first Virtusite to name that movie reference)  Everyone seemed to be doing a good job keeping up with caloric intake/hydration, and the miles were passing easily. As we were taking the exit going into Hermann, Luke decided he wanted to sprint to the nearest gas station. I was feeling froggy, so the race was on. He had the jump on me, so I went for broke… for about 2 seconds.

That'll slow you down in a hurry

The sound of a bike chain snapping and the resulting loss of control is unnerving. Losing a sprint kinda sucks too, but I knew fixing the chain was going to be a problem. Lucky for me, I had a pair of supportive team-mates there to take photos of me pissing into the wind.

I finally admitted defeat and let Luke fix my damn chain. After leaving Hermann, there was only one thing on our minds… Treloar cheeseburgers. We’d lost a significant amount of time fixing the chain, so we we needed to push the pace a bit. Everything was going fine until Adam ruined everything by getting a flat tire. Dick move, Adam… dick move.

At long last, we arrived in the town of Treloar. Cheeseburgers and fried mushrooms were CRUSHED and the world was right. No beer was consumed…this ride was serious business. I don’t have a clue why no pictures were taken inside the bar, but we did manage to get a shot of this building…which serves as an architectural representation of Dawn Daly’s penis.

Our final destination, (The Augusta Brewery), was only open until 9 o’clock. If you’re not there by 9, you don’t get any beer. With that in mind, we got our shit together and hit the trail.  Now that we had passed Treloar, it was officially the furthest East any of us had been on the Katy. We couldn’t help but wonder how long this perfect weather would last.  The predicted thunderstorms and 6pm Rapture had clearly not happened, so for now it looked like things were destined to go our way.

Rapture and thunderstorms, my ass!!

Marthasville was the next dot on our map, and that town was BUSY. Mud pits, monster trucks and corndog vendors… this was a redneck y’allapallooza. We watched from a safe distance… don’t wanna get too close to a crowd like that whilst wearing spandex.

Long shadows as the sun begins to set

Speaking of spandex, we made a startling observation on this ride. It seems that my most beloved pair of bike shorts is a bit… worn out. They say the eyes are the window to the soul. Well, apparently bike-shorts can be a window to your ass. 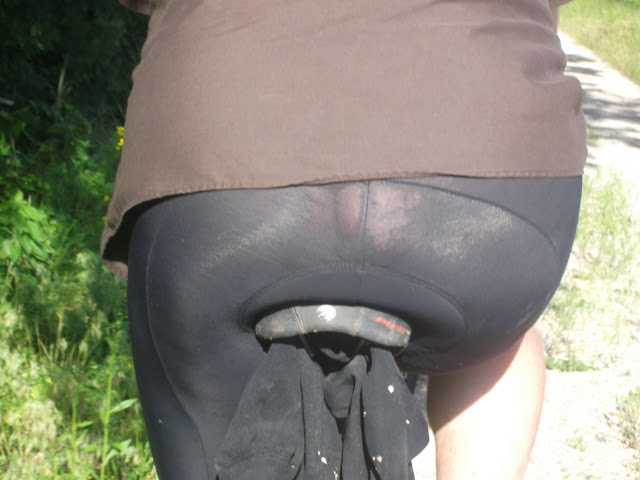 After Marthasville, the only town left to roll through before Augusta was Dutzow. I’m sure there are lots of nice things to see and do in Dutzow, but by now we really didn’t care. There was cold beer in Augusta and none of us felt like stopping here to mess around.

The man-train was gaining speed as we grew closer to our final destination. Conversation ceased as our tempo increased , and it wasn’t long before Team Virtus, “Rapture Division,” was in a full-on sprint to the finish. All energy had to be burned before we could call this ride a success. Luke and I traded places at the front all the way into town. To be honest, I don’t remember who won.  Editors Note: Bob prevailed, thus redeeming his earlier chain-snapping loss.  It was exhausting, but the payoff was well worth the effort. Behold!!

Like a pot of gold at the end of a rainbow

The Augusta Brewery was everything we had hoped for and so much more. The place was much classier than we expected, so we were a bit under-dressed. Oh well, it wasn’t the first time. We found a place to sit and wasted no time ordering our souvenirs….

Virtus rule #47: Always get a growler.

Food was ordered, conversation was started and much wind was broken. We couldn’t help but lament the absence of ALL OF THE REST OF YOU JERKS, but we know you’ll come next time.  There’s just something about these overnight trips that takes all of your cares away. We may have actually been a little bit too happy. Just look at how “comfortable” Adam and I look together…

Adam was fired from the team for making me look gay. Seriously, Cara thought I was cheating

As you can clearly tell, we arrived at the brewery with plenty of time to spare. Now that the beer situation had been handled, there was an even more important decision to be made:

Or something a little further off the Virtus grid:

It wasn’t an easy decision, but I think we all did ok. Tonight was more about drinking beer anyway, and we did just that. 9pm was upon us in a flash, and we were getting ready to leave when a waitress informed us we could stay as long as we wanted.  we’d just have to sit in the dark. So….we each ordered another growler.

...and then we had the place to ourselves

It wasn’t long before we found a fire-pit and a few pieces of wood. Next thing you know we’ve got a fire going and there are 3 drunk Virtusans stumbling around an otherwise empty brewery. It’s amazing noone was killed.

In the interest of brevity and our public image, I’ll leave the rest of the evening out of the report. I will, however, reveal the location of our sleeping quarters for the evening:

Oddly, this was quite comfortable

For reasons still unknown, we were all awake very early. So early, in fact, that we had all of our gear loaded in the van and ready to go by 7 am.

Next stop: Lindy’s restaurant in Hermann for breakfast . I don’t do well with winding hilly roads, so when we finally got to the restaurant I did quite a bit of dry-heaving before the motion-sickness wore off. Lucky for me, I had 2 team-mates there for support. And by support, I mean they took photos and laughed.

Of course, this isn’t the kind of team that lets a little bit of vomiting get in the way of gravy consumption. We went inside and got down to business.

Luke's plate, I suspect this may be part of his American dream.

And just when I thought that maybe Adam was coming around…he went and ordered something like this:

Not a drop of gravy on that plate. That shit is disgraceful. You sir, are fired from the team.

This wasn’t exactly a training ride, but I think we all benefited from it. Once again, the weather man was wrong and we had a great day. We’ll be doing more of these rides all summer, and I predict they’ll get longer and longer as we get closer to the 24 and 36 hour adventure races scheduled later in the year.  Be there next time, you won’t regret it.

Posted in Adam gets fired from the team, Epicnicity---yeah it's a word, Training