Train Long to Race Long – Getting Ready for the Dirty Kanza

Okay, so you may have heard that we (Bob, Robby, and I) are heading out to Kansas in a couple of weeks for the infamous Dirty Kanza 200 mile gravel road race.  Bob is riding it solo, and Robby and I are forming a dynamic duo the likes of which has never been seen!

I’ve been told that the only way to get ready for this race is to get LOTS of time on the saddle… ideally in a sauna, but that’s a little unrealistic (although I used to take the stationary bike into the sauna while wearing a plastic suit and winter clothes to make weight, but that’s neither here nor there).  So last week, we planned a long night ride on the Katy Trail from Jefferson City to McBaine and back.

We met around 8:30 or so at the paved pavilion, and Adam couldn’t make it.  Therefore, he was once again fired from the team.  Robby showed up in a jersey that pre-dated Red Wheel Bike Shop: 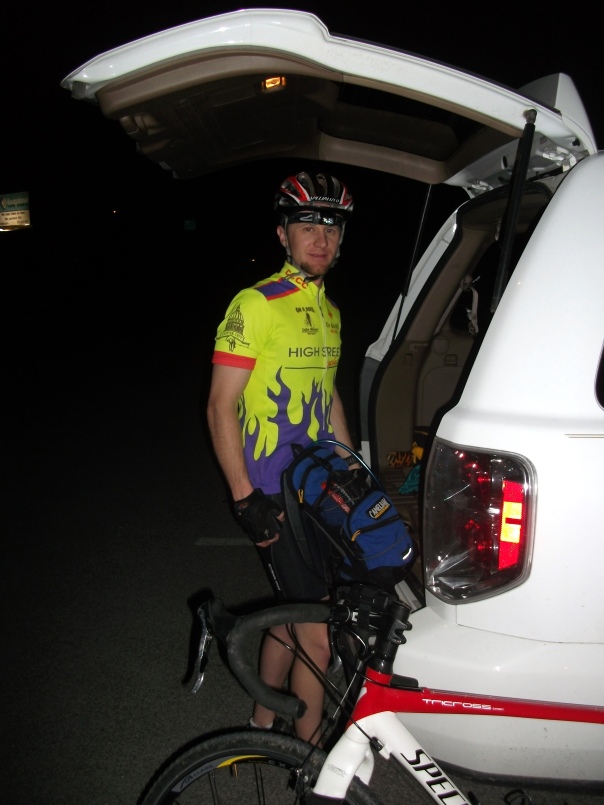 We headed out around 9:00 PM with our sites set on McBaine.  To be honest, if we made it that far and back then it would be my second longest ride ever.  Seriously.  That’s probably not good since I’m signed up to ride half of the DK200 in a couple of weeks.

The only shot of the three of us

The evening was beautiful even though rain was in the forecast.  We had a decent headwind, but it was no match for Team Virtus.  We arrived in Hartsburg in what seemed like no time at all. 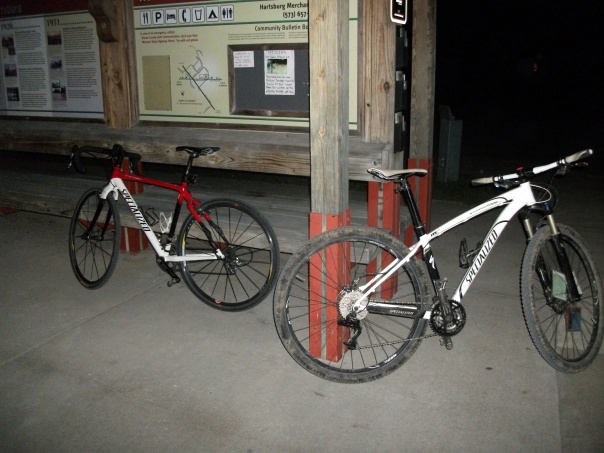 Obligatory photo of our bikes (not sure where Bob's was)

It was there in Hartsburg that we discovered something that all Missourians should be proud of.  Our modest little Katy Trail is a Rails to Trails Hall of Famer!  And I wanted to get photographic evidence of this fine accomplishment, but Bob had to go and ruin the moment…

Lately, I’ve been getting a lot of flats (I think I need new tires), and as we rolled into Cooper’s Landing, I got yet another one.  How many Virtusans does it take to change a flat?  Two apparently:

I hate trying to get the back tire back on. It makes me feel inadequate.

After fixing my flat, we rolled on out, headed for McBaine.  There was lightning in the distance, but so far Mother Nature was cooperating with us.  We made it to McBaine with no more problems.  We stopped for some photos to prove that we did, in fact, make it to our destination. 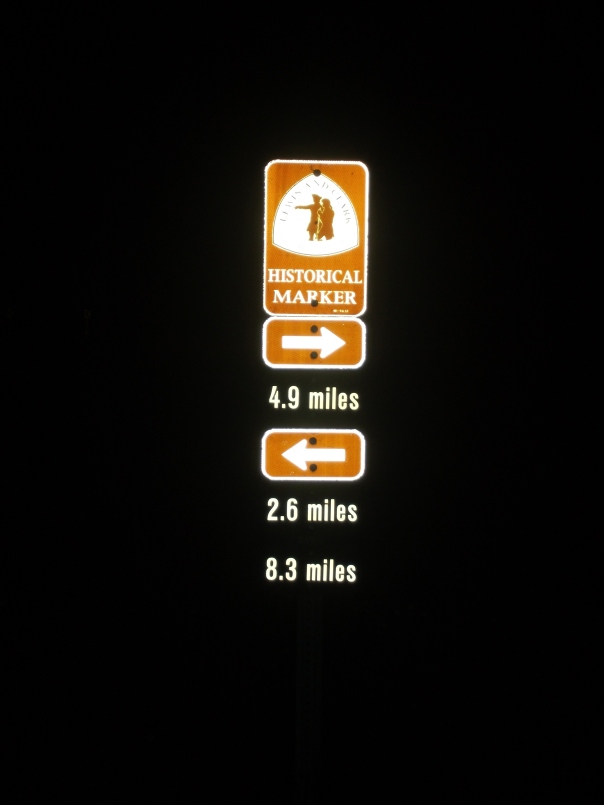 After a little break and a snack, we headed back toward Jefferson City.  If you’ve ridden the Katy Trail much, then you are aware that it is somewhat of an anomaly.  No matter what you do, you always ride into a headwind.  Seriously.  The wind was in our faces on the way to McBaine, and now that we had turned around to ride back home, the wind had shifted.  We were once again riding into a decent headwind.  It never fails.

The ride back to Jefferson City was uneventful, but it was a great time.  I was definitely ready to be off my bike, though.  My ass was done!  The Katy Trail is a different kind of difficult for long rides.  Many people assume the Katy is too easy since it’s so flat.  I beg to differ.  Yes, it’s flat.  But that is part of what makes it difficult.  There are no breaks.  You don’t get any downhills to rest your legs.  You don’t get any turns to break up the monotony.  You just have to keep pedaling… and pedaling… and pedaling…  I think it’s great training for the Dirty Kanza, but I may be delusional.

We made it back to the paved pavilion in Jeff City at around 2:00 AM.  Our actual riding time was around 4 hours.  Not great, but not bad.  It was a great ride, but I was ready to be done.  I felt pretty good during the ride, but it definitely didn’t give me a ton of hope for success at DK200.  We’ll see.

So there you have it.  Just another training ride for Team Virtus.  We’re doing another long Katy Trail ride tomorrow, so let us know if you wanna join us.  We’re trying to re-create the magic from Bob and Adam’s last Katy Trail ride, although that might be impossible.  We shall see.

Posted in Adam gets fired from the team, Training, Upcoming Races