It’s been awhile since I’ve gotten out there for a nice, somewhat long, gravel ride with teammates and friends.  Zack set this ride up, and at first it seemed like it would just be three of us.  Then more people said they were in, too, which was very cool.  The more the merrier!

Look closely and you'll see everyone (excluding me since I took the photo). You can just barely see Stoney's and Bob's heads in the background. Also, this is the only photo of Barry (farthest left) since he took off like a bat out of hell.

We had planned on riding this route.  Well, I planned on cutting that ride short to begin with since I had to be back for a birthday party my daughter was going to… And because I’m a wimp.  We decided to slightly alter the route since the Katy Trail was covered in a foot of snow.  We had to ride on Highway 63 for a short distance instead.  We had no problems, though.

I won’t bore you with too many details.  I’ll just say that the weather was terrific.  Although, the roads were pretty muddy in spots and icy in others.  It was a ton of fun.  You should have been there!

I’ll leave you with some fun facts from our ride, followed by a few photos and then a photo montage.

Now on to the Fun Facts…

Distance: Bob, Adam, and I rode a total of 26.36 miles.  The rest of the group wimped out and decided to keep riding for a measly 30 more miles or so.  In fact, they’re still out riding as I type this.  What a bunch of cream puffs!

**UPDATE**: Zack, Matt, Don, and Stoney made it 55 miles including a 2 mile hike-a-bike section in over a foot of snow (photos at the end of this post).

Rider with the most crashes: Bob Jenkins with two.

Riders in Shorts: One – Bob Jenkins

Rider with the Most Bloody Knees: Bob Jenkins

Now, on to the photos… 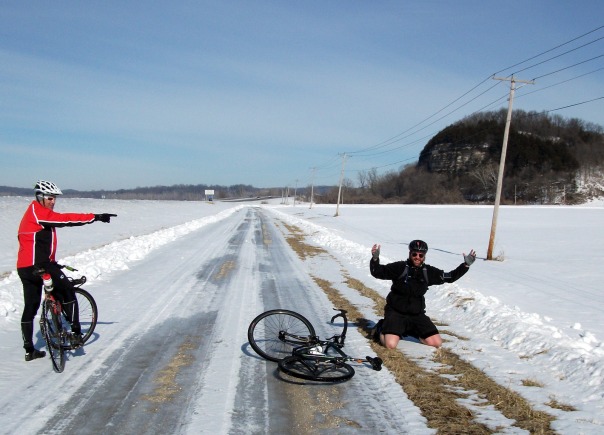 Don points out Bob's first crash in case any of us missed it. 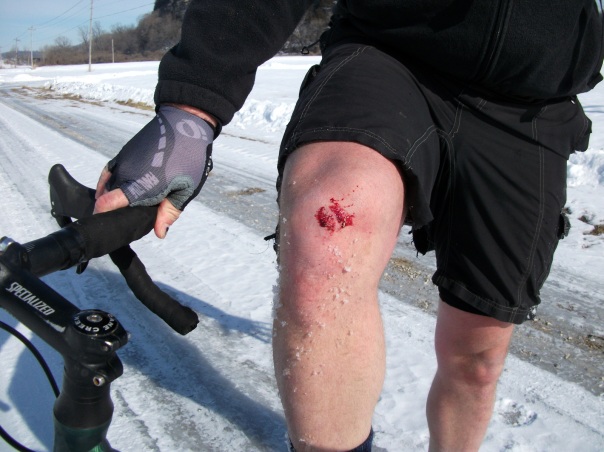 The aftermath of Bob's fall (although it would get worse after the next crash). 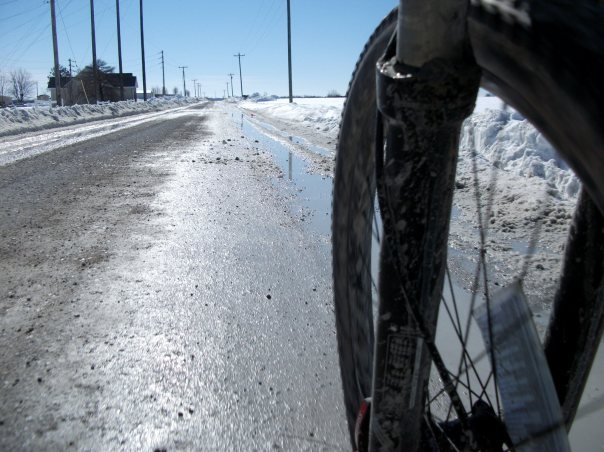 Don't think fenders work? Zack was the only with a fender, so check out his ass (middle) compared to Don's and Stoney's.

Adam's new Camlbak... Well, it was new before this ride. 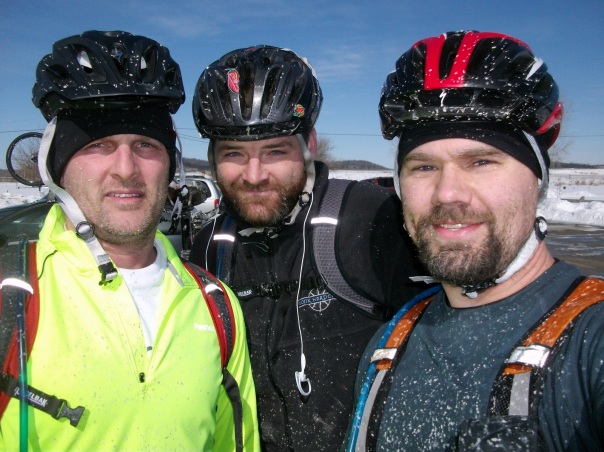 This is what Bob's knee looked like at the end of the ride. I'm sure it won't get infected. (Click on photo to get a really good look)

Now on to the Photo Montage…

Here are some Photos from the long riders’ Hike-a-Bike…

This could not have been easy. (Photo by Matt Stacey)

Zack and Don making their way through the snow. (Photo by Matt Stacey) 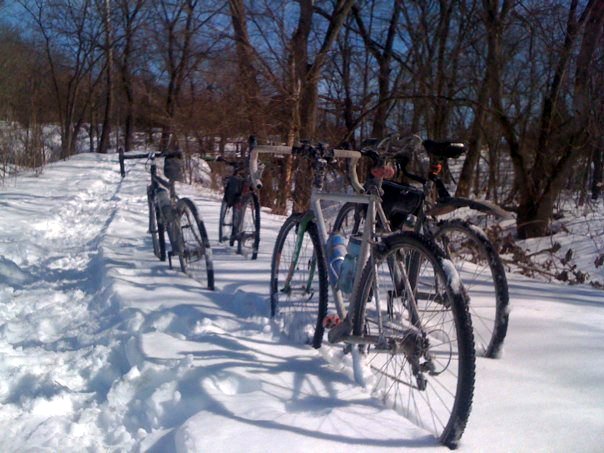 Cross bikes in the snow... So pretty. (Photo by Matt Stacey)

Posted in Nonsense and Tomfoolery, Training